Their Dad’s made them do it!

Awesome prequel and start to this series! I love bully or hate to love romance and this was that and more. There is quite a bit of mystery surrounding the guys at the inferno house at Yale. They are the guys that run the school, the sons of the wealthiest and they are all seniors and they look like they just stepped off of Mount Olympus.

They are nine guys that grew up together and have a tight bond. Their nicknames are based on the nine circles of hell (Limbo, Lust, Gluttony, Greed, Anger, Heresy, Violence, Fraud and Treachery). They are ruled by their fathers and they want to break free more than anything. Their father’s still hold the purse strings with an iron fist and force them to get certain students under their thumbs by having them owe favors to the Inferno boys.

Their father’s don’t tell them why just tell them what to do and when. There are more mysteries, like where the does Treachery’s (a.k.a. Tanner’s) and the twins Anger and Violence (Damon and Ezra’s) father’s take the twins every few weeks and why so they come back all beat up and why won’t they talk about it?

Law student Luca Bailey is in her second year at Yale when she first attends a party at Inferno House. Tanner Caine embarrasses her, but she is intrigued by him and as much as she wants to stay away from him, she keeps getting thrown together with him and she can’t resist the pull. She has heard stories and seen the results of what happens when people owe the inferno guys a favor and never wants to be put in that position, but Tanner seems to want nothing more than to get her in that very place.

The book is full of of heated stares, steamy kisses, and spicy scenes between Tanner and Luca as well as quite a bit of mystery and suspense as to what is going on with their fathers, why they take it and why the nine guys are such jerks also. I like the fact that neither Luca nor Tanner want to have this attraction for each other and both of them seem to be a bit inconvenienced by it. I can’t wait to see what happens next! 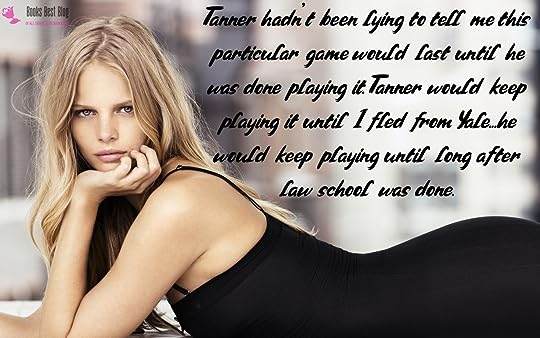