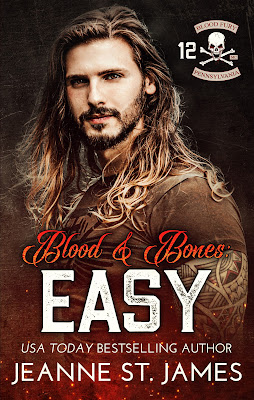 When life comes crashing down around you, the only thing left to do is pick up the pieces…
Easy’s a man who made a mistake and paid for it with four years of his life.
A man who trusted someone who turned around and screwed him so hard it landed him in prison.
A man who spent years searching for where he belonged.
Who found his place after he joined the Blood Fury MC.
Who finally found his “easy.”
At least until her.
A woman who has him playing a dangerous game.
One neither of them can win unless he changes the game and the rules.
While rules were meant to be broken, the one they’re breaking could have serious consequences.
Even so, while she’s a risk, she’s also the reward.
But things can change in the blink of an eye.
When the unthinkable happens.
The unexpected.
Ready or not, life is barreling towards him faster than he can handle.
All he can do is hang on for the ride and hope, in the end, he survives.
Note: Blood & Bones: Easy is the twelfth book in the Blood Fury MC series. As always, this story has no cheating, no cliffhanger, and has an HEA. It’s HIGHLY recommended to read this series in order. 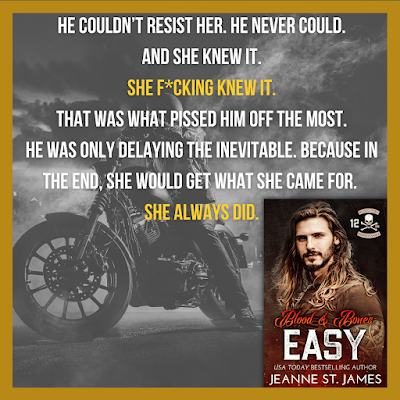 JEANNE ST. JAMES is a USA Today and international bestselling romance author who loves writing about strong women and alpha males. She was only thirteen when she first started writing. Her first published piece was an erotic short story in Playgirl magazine. She then went on to publish her first romance novel in 2009. She is now an author of over fifty contemporary romances. She writes M/F, M/M, and M/M/F ménages, including interracial. Want to read a sample of her work? Download a free sampler book here: BookHip.com/MTQQKK
To keep up with her busy release schedule check her website at www.jeannestjames.com or sign up for her newsletter: http://www.jeannestjames.com/newslettersignup 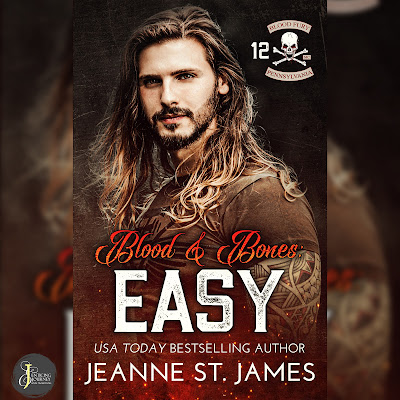