A mafia romance about love and loss by Rachel Van Dyken, the number one New York Times bestselling author of the Eagle Elite series.


…When you awaken in the morning’s hush
I am the swift uplifting rush
Of quiet birds in circled flight.
I am the soft stars that shine at night.
Do not stand at my grave and cry;
I am not there. I did not die.
— Mary Elizabeth Fyre


“I’m sorry for your loss.” I would rather be tortured for an eternity than hear those damn words from one more person, as if Claire, my dead fiance, was a cell phone or car keys.
How about, I’m sorry your life is over.
I’m sorry you want to die too.
I’m sorry you see her in your dreams and wake up only to relive the nightmare.
I’m supposed to be the strongest of them all. Ash Abandonato, ruler, assassin, made man, brother, friend–instead, I hurt everyone I touch in hopes that they’ll feel even a sliver of the pain that bears down on my shoulders.
I didn’t lose.
It was taken from me.
And it’s all her fault, Annie Smith.
I daydream about her death.
And then I close my eyes, and I see her soft smile. I feel her touch, her kiss–it was a mistake what we did that night, but I can’t take it back, and now she’s under my father’s protection–my protection.
My worst enemy.
The woman I’m the most attracted to.
I can’t decide if I want to strangle her or kiss her, and now that she’s stuck in my life, my only goal is to make her feel the same loss I do and destroy her in the process.
I’ll trick her with my touch.
Seduce her with my kiss.
And in the end, when my enemy is at her most vulnerable–I’ll bring down an entire Empire and continue my reign as King.
Bow down, I’ll say as I bring the Five Families to their knees.
Blood in.
Never out.
Damned. 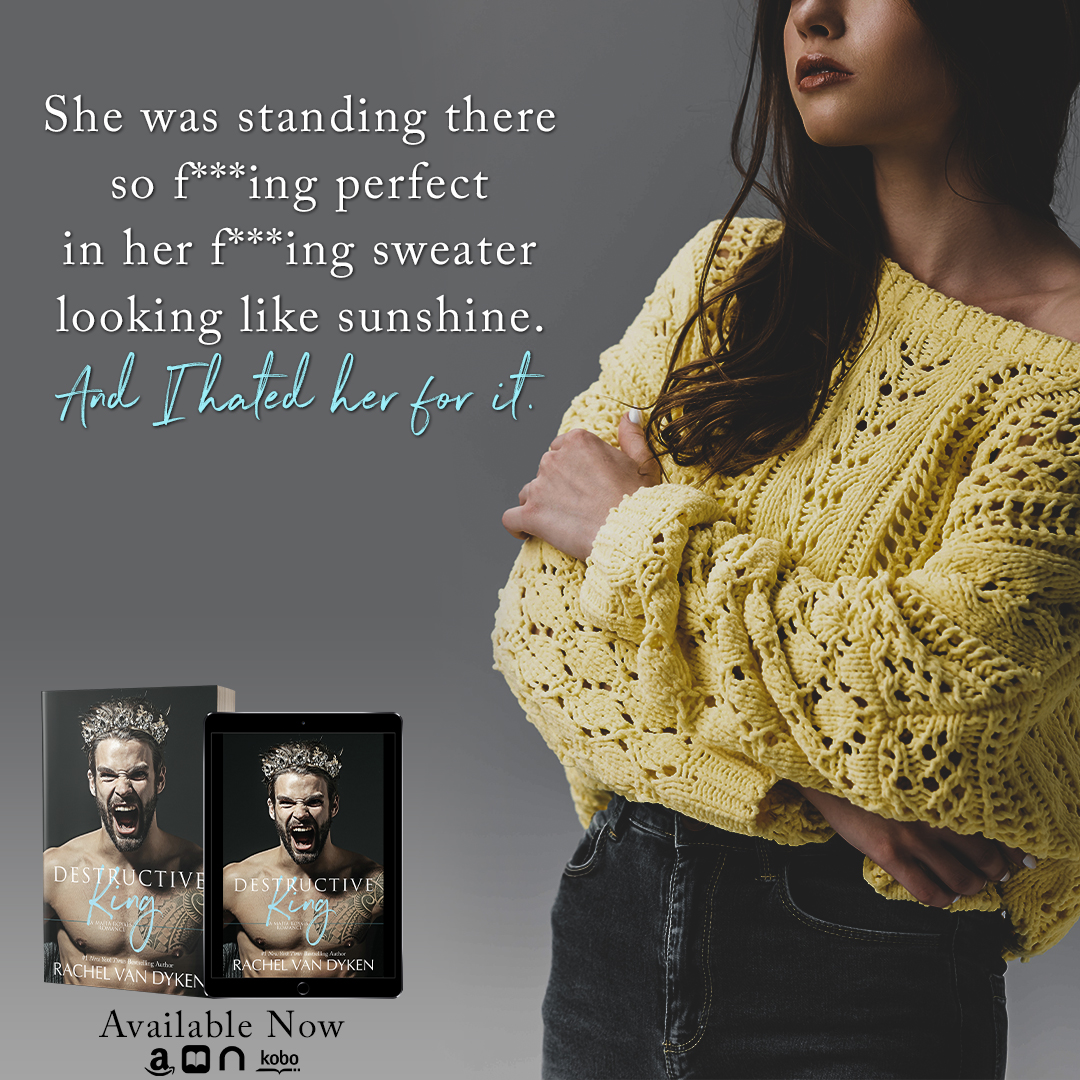 Rachel Van Dyken is the #1 New York Times Bestselling, Wall Street Journal, and USA Today bestselling author of over 90 books ranging from contemporary romance to paranormal. With over four million copies sold, she’s been featured in Forbes, US Weekly, and USA Today. Her books have been translated in more than 15 countries. She was one of the first romance authors to have a Kindle in Motion book through Amazon publishing and continues to strive to be on the cutting edge of the reader experience. She keeps her home in the Pacific Northwest with her husband, adorable sons, naked cat, and two dogs. For more information about her books and upcoming events, visit http://www.RachelVanDykenauthor.com.

The Hero(s): Asher Abandonato – the enforcer in the Abandonato Famiglia. Ash is the one charged with the protection of the family, of getting their enemies to talk and with killing them. Even when they are family that want nothing more than to get out of the life, but that wasn’t allowed because they knew too much to be out in the world alone. He had is first kill at age 12 and by the time he was a senior in High School he had 30+ kills under his belt including some cousins.

The heroine: Annie Smith – after losing her adopted parents, Annie moves in with Senator Chase Abandonato and family (Ash is Chase’s son and lives in the huge pool house). Annie’s past is unclear but it seems that Chase knows something about Annie’s background and she is in some way connected to the mafia by blood.

The Love Story: In Royal Bully Ash met Claire and thought she was his soul mate. She later died in a car accident and Ash blames Annie for Claire’s death for some reason. Annie has always had a crush on Ash and tries to help him with his grief, but he wants none of that and eventually decides he wants revenge.

I really enjoyed this story for many reasons and I liked that the storylines had a lot of mystery and there weren’t obvious clues as to what those mysteries entailed. There was enough to show that there were mysteries, but not too much that we knew the answers early on. That was the one issue I had with the last book.

In this one there was the mystery about Annie’s background and another as to why Ash blames her for Claire dying. There is also a mystery about why Annie is keeping the fact that she and Tank (the Abandonato’s new recruit, an FBI Informant) have known each other for years and didn’t just meet last year at Eagle Elite University.

It is possible that some of these things were answered in previous books, but I have a terrible memory for minor details in books I have previously read (my age is showing). Not only that, I read over 300 books last year and I read the first two in the first quarter of the year, so it is hard to remember.

There were some more mysteries as well that moved the plot along, such as the stuffed white horse that Ash found. The meaning behind that in the mafia is “Rat”. Obviously we don’t think Ash is a Rat, but who does and why?

I usually hate books where Hero has a significant other that died. I guess because of all the grief and angst, but also I like the protagonists in a romance to find their “one” and not have had two “ones” if you know what I mean. I don’t mind previous romances in their past, because obviously the exes were never the soul mate or they would still be together.

That is just me though, my preferences and most of the time (like now) when I end up reading second-chance romances with a death of the ex, I end up not minding. In this one the grief Ash felt spurred on his feelings of hate for Annie, but he totally wanted her as well right off the bat, which made him hate her even more. I ended up liking the story and it made the passion between them whenever they were in the same room, so hot!

Lastly the humor in the book was great. This young blood thirsty mafia family makes fun of how ruthless and savage they are. They are all a bit crazy and the things they do and say are sometimes pretty hilarious. I loved it!