A Touch of Magic Release Blitz 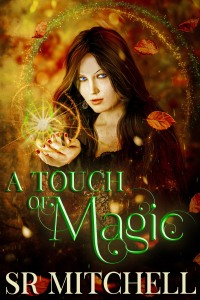 Can she save the people and their land without losing her heart? Or is it all intertwined?
Clara…
She was a little white witch from a little northern Massachusetts town. Clara thought she had her life figured out.
That is, until one night everything changes and she is transported back in time and straight into the arms of a very handsome Highlander. She is thrust into a place and time she has no clue about, with people that expect the world of her, and Clara is just trying not to hyperventilate.
Sooner or later Clara expected something to happen, but being knocked into the past, literally, had not crossed her mind.
Then there is the handsome Laird. He influences her magic. Not only does she need to heal people, heal him… but she must heal the land before his people starve.
As she accepts her destiny it is not just the land or people at stake, it’s her own heart.
Bruce…
The last thing he expected was for a beautiful mystical female to emerge from the woods, injured, on the night of Samhain.
The last few years had been harsh on his lands. Food was scarce and people were suffering. His healer was old and did not possess enough power to heal the lands. He did not pretend to understand the meaning behind everything the old healer Tibith told him.
He is instantly drawn to Clara. It doesn’t take long for the lass to soften his scarred heart. The fire in his chest for this bonnie lass builds by the day. Either he can release it or let it consume him.
Only time will tell if he will be strong enough to resist her or if he will succumb.
He does not realize it, but Clara will save him and his people in numerous ways.