From USA Today Bestselling Author Cora Kenborn comes a dark and twisted enemies to lovers retelling of Anastasia.
They call me America’s Sweetheart.
Hollywood royalty. The last of an era.
Sole survivor of LA’s most infamous crime.
I’m not any of those things.
He forced me into the spotlight.
The liar with a perfect smile and cold blue eyes.
But Alexandra Romanov’s fate won’t be mine.
I’ll speak her lines. I’ll hit the mark. I’ll strike a pose.
And when the past and present collide, I’ll become their worst nightmare.
They told me to preserve the legacy.
Be careful what you ask for. . .
You just might get it.
**Please be aware this book contains dark themes and sensitive subject matter essential to the storyline that may bother some readers.**

Cora Kenborn is a USA Today Bestselling author who writes in multiple genres from dark and gritty romantic suspense to laugh-out-loud romantic comedy. Known for her sharp banter and shocking blindsides, Cora pushes her characters and readers out of their comfort zones and onto an emotional roller coaster before delivering a twisted happily ever after.
Cora believes there’s nothing better than a feisty heroine who keeps her alpha on his toes, and she draws inspiration from the sassy country women who raised her. However, since the domestic Southern Belle gene seems to have skipped a generation, she spends any free time convincing her family that microwaving Hot Pockets counts as cooking dinner.
Oh, and autocorrect thinks she’s obsessed with ducks.

My review of Starlet

I had some small issues with this one at the beginning but it was so compelling and twisty that they didn’t end up detracting from the whole. Sometimes in a book, I can ignore some missing background information, but when it keeps coming to mind that if it were real life, something could never happen like it is portrayed, then it begins to bother me. This is a retelling of Anastasia, a story reminiscent of My Fair Lady, where a con man is trying to pass off an imposter as a lady, or in this case the long lost heir of murdered Hollywood Royalty.

Dominic McCallum is the owner of an entertainment news website and his business is in jeopardy of going under. He wants to save it by producing Alexandra Romanov to the public. Alexandra Romanov was the eight year old daughter of Hollywood royalty and when her family was murdered the little girl was not found with them. Speculation over the 15 years since the crime is at an all time high and there have been several girls that have claimed to be her, all have been disproved.

Dominic meets a waitress in a bar named Angel who looks just like the age progressed picture of Alexandra. Angel is struggling to make ends meet and agrees to come forth as the lost heiress. Angel is a failed actress and Dominic is the reason for her situation. Since he wrote a story years ago that outed a famous Director who was abusing women. At the time, Angel (under a different name) was set to be the lead actress in that Director’s upcoming film, and Hollywood assumed she got the role on her knees.

What kept bothering me at the beginning of the book was that there weren’t really any Henry Higgens/Eliza Doolittle moments. By that I mean, there seemed to be no preparation before they went live with the story. Dominic didn’t even ask Angel about her background. I mean if you were going to try to get a million dollar reward for the return of a lost heiress using an actress, wouldn’t you at least ask if the girl has relatives, friends, former school mates, that will come out of the woodwork and say they’ve known her all her life and she can’t be Alexandra? Dominic puts out a press release and has Angel in front of Paparazzi before he even asks about her background.

Though like I said, as the book progressed and got better and better, I just shoved those thoughts out of my head. I think in the end the stuff I thought was missing was just inconsequential in the greater scheme of things. The book wasn’t about how they perpetrated the crime, but what happens after the world believes Angel is really Alexandra. That story was brilliant.

There were so many characters and storylines that it seems like it would be complex, but it is always so great how authors can take a bunch of different and complicated storylines and have them weave their way through a book and tie up coherently in the end. This was one of those books that all came together so well and everything I thought was predictable was turned on its tail by the end. I mean, some of those things turned out as I expected, but some didn’t and even things I predicted ended up blowing me away because they were surrounded by other surprises.

The romance between Dominic and Angel was killer. It was super steamy and I would give it five out of five flames 🔥🔥🔥🔥🔥. There were just the right amount of intimate scenes to add to the book without taking it over. This one was more story focused than romantic and the storylines were so good. Angel’s past, Dominic’s criminal past, the Romanov murders, Dominic’s reason for going after revenge on the studio executives, Angel’s acting career, and more. I was actually pleasantly surprised at how much I liked this book! 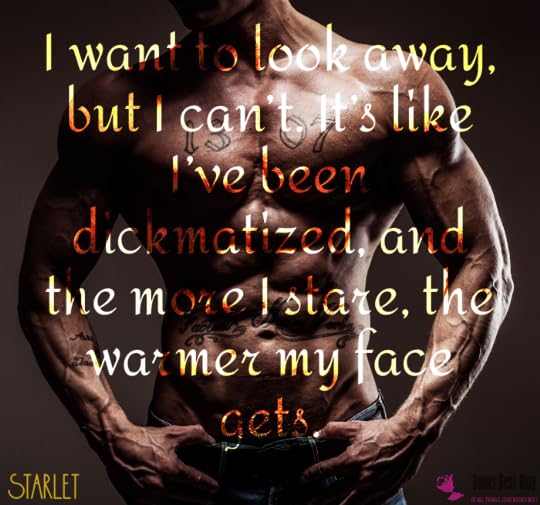