“Blaise is the perfect rich prick to fall in love with! One of my fav reads in 2020!”

He walked into school on his first day and owned it.

I guess that’s what happens when you’re a prick, rich, and you’re best friends with the ruling school’s king.

I mean, I have nothing to do with them.

I’m a loner, invisible, and that’s how I wanted it to be.

I was even proud of it, until I wasn’t.

Until I saw a girl kneel before him.

Until I couldn’t look away.

Until he caught me watching.

His name is Blaise Devroe. My name is Aspen Monson.

He only knew how to get, command, and demand attention.

I knew how to do everything but that.

And this is our story.

To celebrate, Tijan is giving away a $50 Gift Card. Click here to enter → http://www.tijansbooks.com/rich-prick-giveaway.html

I’d done my research. Zeke Allen’s cabin was set a good ten miles away from the nearest neighbors. I should’ve been in the clear to sneak onto their land, do a little freestyle camping, and listen to the party sounds like the loser I was. But noooo. I was about to get company. As I snuck out of my tent, and realized who it was, I almost crapped my pants. It was Blaise DeVroe, holding hands with Mara Daniels. As popular girls went, Mara Daniels was one of the nicer ones. She was on the dance team. Dark hair. Shorter, but athletic. The problem with Mara was that she was friends with the other popular girls. Some of them were nasty—hence the reason I wasn’t friends with them. Not that they’d tried to get to know me. Not that I even registered on their radar. But then again, that’s what I did. I didn’t engage. I didn’t attend. I was on the edge. I was the invisible girl, and here I was, being the invisible girl once more, but man… When I saw it was him, and then saw how his hand went from holding hers and guiding her to a tree to slipping around and grabbing her ass, something came over me. I couldn’t retreat back to my tent. I couldn’t even stay hidden behind a tree and just listen. I know, I know. This was all sorts of wrong, but Blaise was Blaise. He’d become the guy in my dreams, my weird schoolgirl fantasies. He was my high school crush. Everyone had one. If you didn’t, you’re even weirder than me, and that’s saying something. So when I started salivating over Blaise DeVroe, I kinda just let myself go. I mean, nothing was ever going to happen. Guys like him didn’t date girls like me. They didn’t even notice girls like me. I wasn’t crazy. That’d make me all sorts of delusional. I was a realist. I knew my place in life’s hierarchy. I was at the bottom. I was not the very bottom—because of my family—but socially, I was barely one rung up the ladder. Anyway, when Blaise started kissing Mara, when Mara knelt in front of him, when she opened his pants—I lost all train of thought. And, oh my God. My whole body was awash with sensations, and I was captivated. Captivated! Entranced. Mesmerized. I could not look away. Then I felt throbbing and a warm feeling between my legs, and it was game over. It was all I could do not to make a sound, because I wanted to. So bad. I wanted to moan. I wanted to touch myself, but I didn’t. I kept myself reined in, but watch? Oh yeah. I watched. I couldn’t not watch. I watched the whole thing. I loved the whole thing. And then at the end of it, I almost died.

Tijan is a New York Times Bestselling author that writes suspenseful and unpredictable novels. Her characters are strong, intense, and gut-wrenchingly real with a little bit of sass on the side. Tijan began writing later in life and once she started, she was hooked. She’s written multi-bestsellers including the Carter Reed Series, the Fallen Crest Series, and the Broken and Screwed Series among others. She is currently writing a new YA series along with so many more from north Minnesota where she lives with a man she couldn’t be without and an English Cocker she adores.

My review of Rich Prick 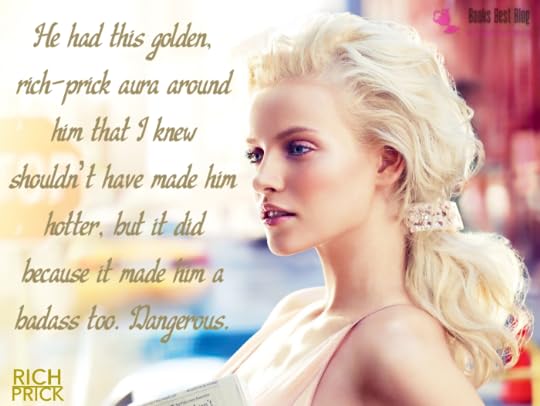 You know Nate of Fallen Crest? He is the best friend to Mason and Logan Kade. You might remember that when Nate was younger his parents (documentary film makers) did everything they could, even moved to California to keep him away from his friend Mason. Though Nate eventually rebelled and basically kicked his parents out of his life. He now lives in Boston with Logan and Mason is a huge NFL star and has been with Sam for years. Nate also had younger siblings Owen and Aspen. This is Aspen’s story.

A year or so before the book begins, Owen and Aspen were in a car accident in which Owen was killed. He was her brother and her best friend and losing him did something to her. Aspen is a loner and likes to be in the background, unnoticed by others. She doesn’t fit in and doesn’t know how to be around people. Her favorite activity is camping all alone. She used to go camping with Owen and now for her, camping is like breathing. She feels close to Owen.

Though Aspen is a normal teenager in other ways. She has a crush on Blaise, the hottest boy in school. She goes to the school parties, though always in the background or camping in the woods near the party. This is where she sees Blaise with his girl kneeling in front of him. She watched and he saw her. After that he couldn’t stop thinking about her. 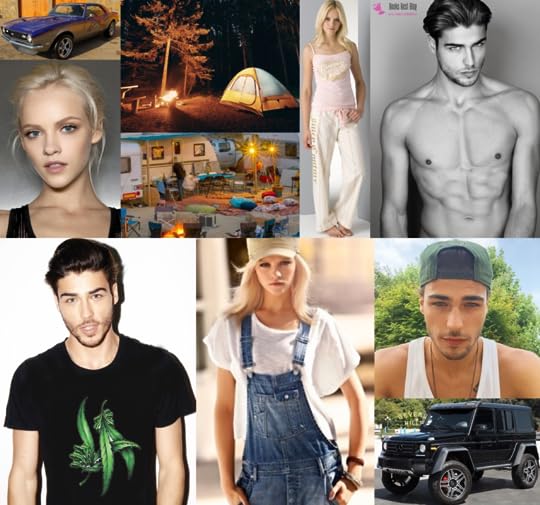 Aspen isn’t the only one with issues. Blaise is fairly new at Fallen Crest Academy, though he did live in Fallen Crest when he was younger. He and his mother moved back to town recently after she got divorced and they moved away from New York. Blaise reconnected with his old friend Zeke and his mother introduced him to her new boyfriend, who it turns out looks a lot like Blaise. That is how he found out that his Dad in New York wasn’t really his Dad. Now he has a brother that could be his twin and hates him, and a sister who wants to know him.

The romance between Aspen and Blaise is awesome. Tijan writes good romance and she does great book boyfriends. Blaise is great with Aspen and though he was never one to date, he gets hooked on her pretty fast. It helps that she is model pretty (actually having done some modeling in the past). The major conflicts in the story were terrific, though I won’t specify what those are. I really enjoyed that characters from other Tijan books made up much of the supporting cast. It is really making me want to move some of those books I missed up to the top of my TBR. 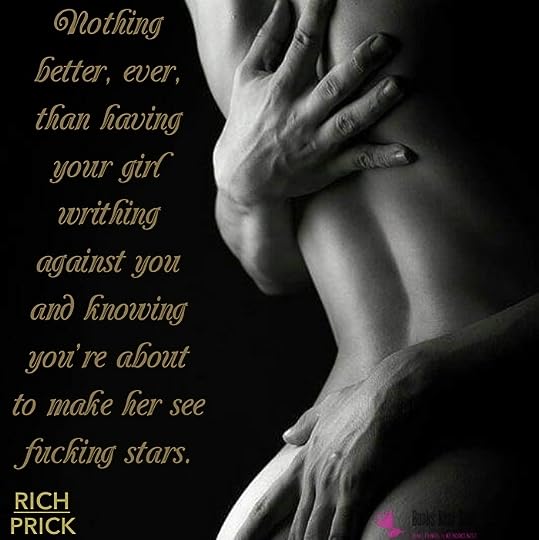