Sometimes when things are falling apart, they may actually be falling into place!

While reading this book what comes to mind most is introspection amidst disaster. This is a story of a girl caught in a hurricane and the guy she met online. Both main characters have a lot of time for introspection and a lot of thoughts go through their minds before, during and after the hurricane. I can see this happening in real life and so many of the thoughts they have seem real.

There are a few instances when both Shannon and Kyle are lost in their thoughts during times when they either should be acting not thinking or times when really people aren’t able to have a coherent thought, like while are in the waters of a flood trying not to drown and a few cases of the author waxing a bit too poetic. However, for the most part I really enjoyed all the introspection and felt it could and might happen just like it did.

Shannon lives in the trailer home that she grew up in with her Mom. They had weathered more than one hurricane in that trailer, though the last big one they were forced to evacuate and they ended up losing some valuables because the roof leaked. They promised each other that next hurricane they would stay in the house because if they did that last time, the losses could have been prevented.

Shannon and Kyle met on the internet and have been having an online and Skype based relationship. They both admit to being in love with the other and they Skype every day, sometimes for hours at a time. They are planning to meet in two weeks, and Kyle lives four hours north of Houston where Shannon lives. Hurricane Harvey is closing in and Shannon doesn’t plan to evacuate.

Kyle is working throughout the hurricane, as it hadn’t really affected his area other than some light rain and winds. Shannon is in the midst of the hurricane which pretty much stalled right over Houston and is dropping record amounts of rain and high winds non-stop for days. At one point, the flood waters start breaching her house and she is able to get ahold of Kyle long enough to let him know she is in trouble.

Kyle and his three friends take off to go get Shannon and the description of the drive is pretty awesome. It conveys the adrenaline rush when they first get his friend’s boat and supplies along the first hour or so, to the time when their heartbeats finally slow and they realize there are hours left to drive. To the tension when they get turned around by the cops at a barricade and go to some backroads. Then the worry as the water gets deeper even though they have 50 miles yet to go.

I really liked this part though I think during the drive they would have come up with a game plan of how they would handle things. I mean they have a boat and have to search for one girl. However, if it were me I would be worried about coming across a bunch of others that need help. I think that despite the moral and ethical issues, they should have decided to get straight to searching for Shannon. But what happens is that before they even get the boat launched, a bunch of people come up to the truck needing help and Kyle’s three friends stay behind with the truck to help while Kyle goes after Shannon alone. 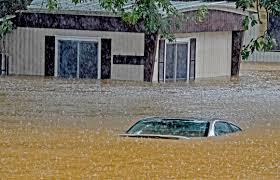 That just seems stupid to me. It is the middle of the night and electricity is out so it is pitch black. How is one guy going to search for one flooded mobile home, or one girl if she had to abandon her home? He would have to be driving the boat and should at least have 1 friend there to point a flashlight around and be a lookout. Though it does not seem smart to me, I can’t say that it detracts from the story by being too unrealistic. People do dumb things sometimes, and it would be very difficult to turn away from people needing help. The story does seem real in that sense.

If I were to say being out here alone in this storm like this were anything other than absolutely terrifying, I’d be lying. When I first set off from Tim and Mike and Aaron, this fear is manageable, noticeable only by my fast-beating heart, my clenched teeth and my strained focus on the endless lake of water before me. But with every impediment I encounter and then overcome, my terror grows. It’s as if for the first time I’m starting to truly realize just what being out here could mean.
I could die.
With this thought I freeze, though for no more than a nanosecond. The next thought is powerful enough to push me right on through the terror that has seized hold of my very soul.

You might. But without you, Shannon will surely die.

The romance between Kyle and Shannon is true and deep despite their never having met in person. Though for some reason their pet names rubbed me the wrong way. “My darling, darling baby…” They do love each other but Shannon also has fears and insecurities. She is afraid that Kyle won’t really love her and also that he won’t live up to her fantasies and expectations. I thought that these get right to the heart of what would happen in a relationship like theirs. Though once they are together the story gets a bit sappy. I think the story should have gone into the search a bit longer and should have ended prior to the Epilogue(s).

Overall, the book was terrific. It was an in depth, minute by minute look into the minds of people going through a disaster and I found it truly fascinating. Though there could be a bit more editing and there was one part that seemed a bit too coincidental or possibly unbelievable. Though that does happen in books, especially romances. So I give it a solid 4 stars, and recommend this book as definitely worth reading!