Cruel Billionaire by @authorlumarose is LIVE!

Unbeknownst to her, Isla Flores returned to town with more than just her suitcases in hand. She dragged a shitload of baggage from the past into my present.

Her reappearance spurs my father’s twisted mind into overdrive. He devises a plan for me to marry the woman I love to hate. I want to tell him to go to hell, but he knows my secrets. Our secrets.

We never speak of what happened on our prom night, but Isla Flores’ arrival threatens to bring that night to the surface and reopen the cold case file.

Doing my father’s bidding will not only make me more like him, it will destroy Isla in the process.

Sometimes you have to be cruel to be kind.

I liked this book because it made me think. Sometimes even though there are things about a book or about the characters in a book that I don’t like, I can still enjoy the book overall because I can see how the characters might behave that way, given their upbringing, their age, their circumstances or whatever. Granted it doesn’t excuse bad behavior but it puts it in context.

For instance a teenaged boy doing something stupid out of jealousy and a sense of betrayal when the girl he has been crushing on and flirting with all year suddenly goes to prom with one of his best friends instead of waiting for him to ask her and loses her virginity to to that same friend. That same teenaged boy instantly regretting his decision as soon as he does it but unable to take it back.

Here are some things I liked about this book:

The heroine or main female character Isla, was very believable and sympathetic despite having been hurt more than once by the Hero, Garrin. I think a lot of women might have a soft spot for their first big high school crush if they came back to their home town and found him to be unmarried, super hot and a billionaire. If you were still attracted to him like you were in high school and that old crush came back, it would be hard to see past that to your grown up sense of self preservation. Especially if you were going through a difficult time in your life like a parent potentially dying.

I like the fact that Garrin had a huge crush on Isla during high school and that he has used paid escorts ever since because he was hurt so much by what he saw as her betrayal so soon after his mother’s death. Garrin uses prostitutes so they will leave right after he is finished with their dates and they don’t expect him to get feelings for them. He holds himself away until Isla come back into his life and then he opens himself up to her and to love.

At first I thought his using prostitutes was just a sign of his disrespect of women and the fact that he was an entitled arrogant jerk, but I see now that he was trying to protect himself. He just couldn’t protect himself with Isla because it was more important to protect her. So he opened himself up to love. 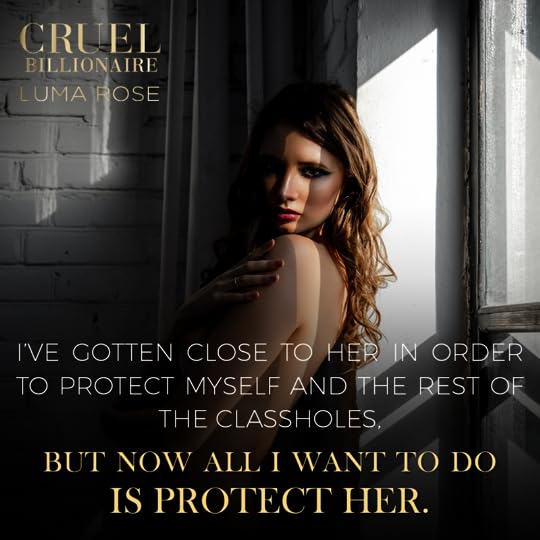 The “Classholes” as they are called. Six ultra rich and hot male best friends who made a game out of being jerks in high school and betting each other they could do different things for points. These things usually were at someone else’s expense. I would say that this is a sign of their wealth and entitlement, but I have heard of many high school boys from all aspects of life playing similar types of games, girls as well (ever heard of truth or dare). Though not always as mean spirited.

These kids learned at the hands of their even meaner and crueler parents. It seems something terrible happened the night of Prom and it was worse than what happened to Isla. The Classholes were involved and it is shrouded in mystery from the beginning of the book. The problem I have is that not much of the mystery has been cleared up by the end of the book. All we know is that Garrin’s father is holding something over his head and using it against him and the rest of his friends and forcing him to do what he wants.

There is the allusion to the fact that the other guy’s parents might be doing something similar to them, However I am not quite sure because they all talk about Garrin’s father as being the worst and cruelest father out there. The Classholes made a pact to never talk about what happened on Prom night so I think that maybe they all are unsure about what really happened and could get out from under all the blackmail if they just talked about it, but that is just my opinion and I could be wrong.

What I am afraid of is that we will find out a bit more with each book about these guys but won’t find out the full truth until the last book. By the way, one of the six Classholes, Garrin’s best friend Carter committed suicide back in college. So there will probably only be five books.

I did really like this this story. I liked the mystery, the steamy romance, the friendship and the camaraderie, and there was resolution within the story, just some of the major questions weren’t answered, but that happens in series. It’s funny that it seems like it is often a theme in books like this with the ultra wealthy bad boys that their bad behavior is ultimately learned from their parents who are almost always more mean and cruel than they are and it is usually the love of good man or woman that can turn them around.