Very different than any reverse harem I have ever read!

I’m a bit conflicted about this book. At this point I’m not quite sure what to write so I guess I will break this up into sections and see if that works out for me. First of all, the author states in the title and the blurb that this is a Bizzaro Universe/Alternate reality to her Gods and Monsters Trilogy, which I have not read. So I am not exactly sure how much the relationships in this book are driven by the relationships in those books. I read this as it’s own stand-alone which the blurb also stated it was.

The main character in this book is Jane Mortaime who moved into a new neighborhood when she was five years old. She was a Daddy’s girl and she liked to watch the neighborhood boys play football. There was David Leodegrance, who was her neighbor on one side, who she thought was the “bestest” ever. But she also like to watch some of the neighbors on the other. The Godson’s had a house full of boys, but her Father noticed that she liked to watch Ryder the most, as well as his twin Tercero and older brother Luc.

Jane’s father died while she was still very young and she soon became best friends with David. David and Ryder became the fiercest of rivals and by freshman year were fighting for the same position on the football team. Jane and David were falling in Love and she took up David’s side in the rivalry especially when Ryder was able to take away David’s spot on the team that he had played the last few years.

David was devastated and to make it worse, David’s Dad, whom Jane also thought of as a second father, told her that he was marrying her mother and that David would become her stepbrother. He had no idea that Jane and David had been falling in love with each other over the past few years and they were heartbroken.

Jane ends up having to tutor Ryder and finds out that Ryder isn’t the evil bad boy she has always thought him to be. It seems Ryder has always held a torch for her and unlike David, he has waited for her to be ready for him. However after David sees that Ryder is interested, he finally comes clean about his love and things start to get complicated.

The stepbrother angle in this book was a really good one. In most cases where the two main characters are step siblings, there is way too much angst about it when the characters don’t even meet until they are nearly adults and they are only step siblings for a short time. In this case, Jane and David have known each other since they were kids and have slowly been falling in love from the ages of 5-14. However, fact that they are step siblings from the time that they are 14-17 and have bedrooms separated by only a bathroom makes being together extremely angst worthy. Especially since the parents don’t know about their love.

I loved the humor in this book. Ryder especially was extremely funny and often said the most hilarious things. Jane’s stepdad became furious and banned her from seeing him and after that, the way Ryder would talk to him was just classic. He would call him old man, and tease him in the worst ways. Just the things that would come out of his mouth. He would be one of those people that is just fun to be around Because you would be laughing all the time. 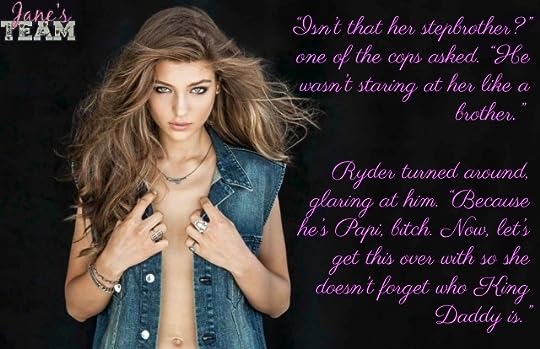 All reverse harem romances are different. This one was really different in that Jane didn’t feel the same about each of the guys. I just can’t see how that would work. I can see how you can love more than one person and how you can even love them differently. But they kept saying that Ryder was her number one and he basically made the rules. David was definitely number two. It seems like Tercero was number three and Luc was last.

This wasn’t just some sort of power order in the relationship, this also seemed to be in her affections as well. So I guess I just didn’t get it. Plus who could continue to love someone that loved someone else more? I mean that would cause a bunch of feelings of animosity, pain and resentment. I would think anyway. So that was my biggest complaint. I hope this isn’t considered a spoiler. It might not even be true, but it was the feeling I got from the book.