The Psycho by Nikki J. Summers 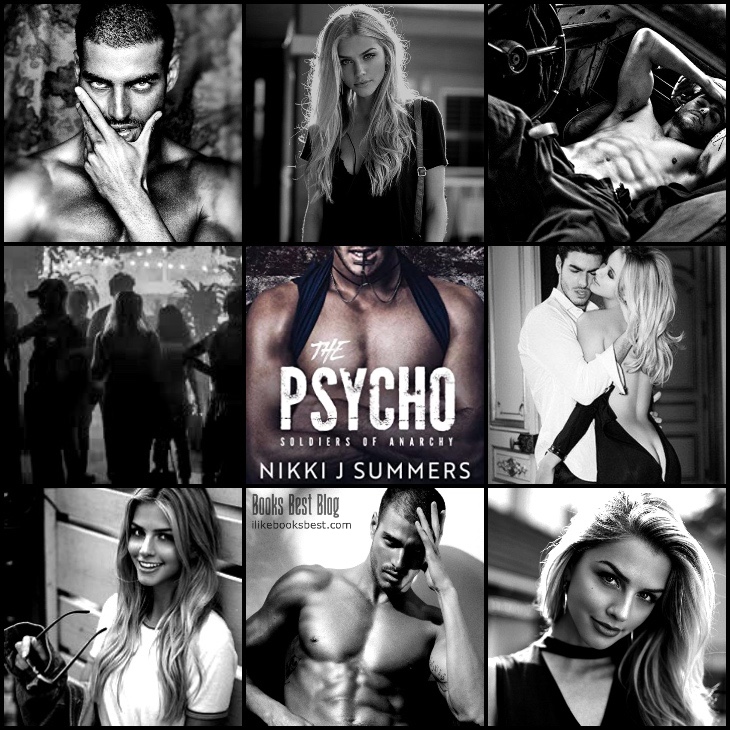 The heroine: Olivia – she has been done wrong in her life and a lot of people have think she is something she isn’t. Partially because she is outspoken and unafraid. Men have used her and she is afraid all any man will ever want from her is one night.

The Hero: Adam – a true psychopath, Adam doesn’t have feelings. He hears voices in his mind and doesn’t feel regret or remorse. This is why he is perfect as the de facto leader of the Soldiers of Anarchy. He and his friends in the Soldiers are a gang that are trying to improve their city. They own a club and each have a room in the penthouse apartment above the club. They clean up the streets by acting as a kind of vigilante force.

The Story: Adam is the baddest guy around and after seeing Olivia, he knows he wants her to be his. She quiets the voices in his head. So he stalks her and he texts her. Olivia is aware of him and knows who he is, and she likes it. She answers his texts boldly and is audacious in her response to him. She knows she should fear him but she doesn’t.

The book is told in dual points of view and narrated in dual narration by Faye Adele and Shane East. Both narrators have British Accents and they were perfect for the story. Shane East is one of my favorite narrators and I just love his voice. Faye Adele also has a very pleasing voice which sounds age appropriate for Olivia.

I usually love stalker love stories, even more so when the Hero is a psychopath or sociopath. I did enjoy this book but there was something about it that I just didn’t connect with. Maybe because though Adam was a killer, the Soldiers of Anarchy is a group that does good. My love of Dexter is probably shining through here, since the soldiers go after pedophiles, rapists and more. So maybe I just don’t see him as bad as he is supposed to be.

Also Adam seemed tamer in his stalking than I expected. Maybe that was because Olivia knew who he was and knew he was always out there watching her. He was also a genuinely nice guy to her and dreams of a home and family with her. It all seems so white picket fence and daisies. I guess I just wanted him to be a bit more Psycho.