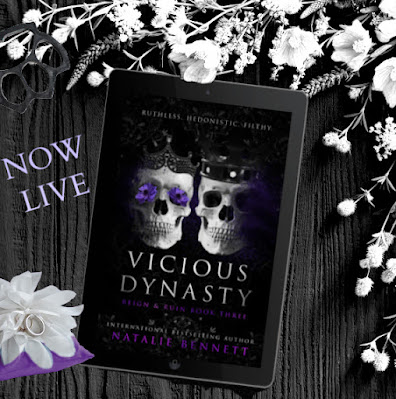 Happy never, ever.
Hate is said to be disturbingly similar to love.
When it comes to him, I’m cursed to harbor both.
The specious spark that brought us together with an all-consuming obsession quickly became the catalyst of my undoing.
Shadows and darkness have filled the bittersweet years that saw us take two very different paths.
Judas Barron has become an intimate stranger.
He’s older now. Unpredictable. Heartlessly cruel.
So much more beautiful.
He isn’t the only one who changed.
The girl he once knew is gone, rotting beneath the wreckage of what he destroyed.
His influence and power have spread like the plague. With his position solidified he’s decided to make good on a promise he made and like the strike of a match, a hellish blaze consumes us once again.
This time, it’s up to me to decide how this will end.
I can reign beside him, or make sure his dynasty is scattered among the ashes of our ruin.
****
Vicious Dynasty is a dark enemies to lovers ‘romance’. It is the third book in the Reign & Ruin Trilogy and cannot be read as a standalone. This story contains explicit content and some subjects readers may find objective. 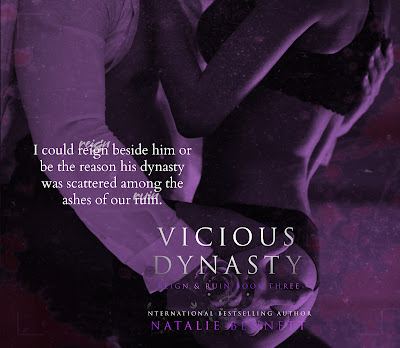 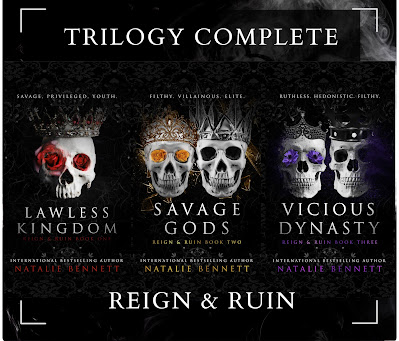 The heroine: Rhiannon Clermont Saldaña – Judas and her parents ruined her life and when she left him, he said that he would come for her someday. She told him not to, and has been hiding ever since. Though it is in a luxury apartment, which she and her best friend Audrey work hard for. She doesn’t want to see Judas ever again.

The Hero: Judas Barron – The famiglia means everything and though he let Rhiannon leave after her family was destroyed, he never planned for it to be forever. He stepped up into his position in the mafia, grew from a boy to a man and became the brutal kingpin that he is today. He also never made any bones about the fact that Rhiannon would be at his side again. He always knew where she was and he was just waiting for the right time to go after her.

The Story: Rhiannon is busy living her life and still trying to get over the events of the past, when Judas sweeps into her life again and gives her no choices. She only wants to be around honest people after finding out her entire life and family were a lie. Since Judas knew about it and waited to tell her, she considers what happened as much his fault as her parents.

I liked the fact that this book didn’t begin right where the last book ended. Since they were just high school kids when everything happened in the past. I like that Judas has grown into the man he was meant to be and has very specific ideas on how he wants his life to be. The chemistry between these two is hot from the start and I liked that Judas is a take charge kind of guy, even if his morals are wonky due to the life he leads.

I didn’t really like all the brutality and killing. I mean you expect a certain amount of killing from the mafia, but these guys were killing innocent people for no good reason and I think if you are a smart mafia boss you would keep that to a minimum. It is one thing to kill someone who wants to kill you or even in the mafia to kill the competition when things heat up, but I would think that killing people for no good reason is bad business and will get you in the end. Though I have to admit the violence played into the plot.

“The small beast inside her that enabled the disregard for lives like Joey’s needed to be cared for until it grew and became so vicious no one would dare test her.”