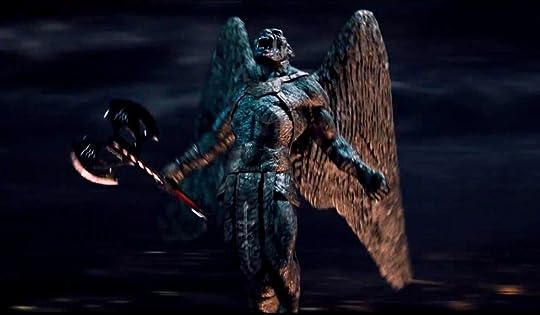 The heroine: Rowen – she is the indentured servant to Abraham, who was father to Carolena from Carnage. Abraham was never a good man but has become worse and now can’t keep himself away from Rowen.

The Hero: Destroy – he was seen as a very lonely gargoyle in Carnage who wanted to have a love like Carnage and Carolena. He had no friends until Carolena and was highly misunderstood, partly because he was a bit of a troublemaker and partly because he was so lonely. Though he has gotten better and often comes to their place to play with their daughter Lily.

The Story: Lore lets Destroy know that he found a woman for Destroy when he and Murder rescued Carolena from her father’s home before Lily was born. Soon after that he takes Destroy to Rowen when Abraham is attacking her and they save her and bring her to the Whispers community.

Though Rowan is not just a human like Carolena, she is a powerful witch and has been holding her magic deep down inside herself for so long that it is now leaking out of her. She is afraid of what she can do, since she has never been able to control her magic.

I am really liking this series so far. It is a very different world than many I have read about before. I like the fact that different supernatural creatures are living together in a community hidden deep in the Louisiana bayou. There are all different types from gargoyles, to vampires, to windigo and even water creatures. I also like that these books focus as much on the story as the romance

This one was also much funnier than Carnage. All the characters are so endearing in their own ways. I will definitely be reading more of this series. They are pretty quick reads at around 250 pages and very entertaining.