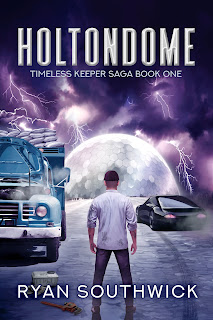 Seg Holton yearns to leave his isolated farming dome and travel the ravaged Earth, or even to Mars Colony. Only a few things stand in his way: an authoritarian government, deadly storms, and an enchanting outsider who may be the most dangerous of all.
Fast-forward 500 years. Civilization has nearly wiped itself out of existence, and is on the long, slow road to recovery, held together by an agreement called the Pact between cities, agricultural domes, and a new global government.
Seg is a farmer in Holtondome. Like his ancestors, he’s chosen a life of ignorance about technology and the outside world in favor of a simple existence, free of the corruption that almost destroyed the human race.
His world turns upside down when Fi arrives. Tall, exotic, and far too wise for her age, she challenges everything he’s been taught to believe, making him question for the first time if a simple life is right for him or, indeed, for the rest of humanity.
But Fi has secrets darker than her black-ringed eyes — bigger than the Pact — that have implications far beyond Seg and the residents of Holtondome.

Returning to Holtondome in one piece always gave Seg a sense relief. At one hundred meters high and a third of a kilometer across, the opaque white dome was visible from all five of the surrounding agricultural domes, beyond which he had never traveled. The prismatic sheen of Holtondome’s solar panels, which covered every inch of its surface, lent a welcome dash of color to the otherwise drab landscape.Everyone was preparing for the oncoming deluge when they neared the western entrance. Lightning storms meant clean water. There hadn’t been one in weeks, which didn’t help the harvest one bit, and even their drinking reservoirs were running dangerously low.People dotted the outer dome’s curved shell, cleaning runners that would guide the rainwater down to one of four retractable collection ducts that directly fed the underground reservoirs. Many also took the opportunity to scrape grime from the solar panels, still caked from yesterday’s dust storm.Understandably, work stopped when the sleek car approached. It glided through the western entrance with silent grace. Inside, Seg’s father, Hap, pulled himself together and gestured the driver to an empty spot between a broken-down tractor and a stack of empty wheat sacks.“Thanks for the ride,” Seg said to the driver.“Like I said, don’t thank—”“Right, I forgot.” Seg turned to the woman in the back seat. “Thanks again.”“Mm.”He’d hoped she would grace him with her eyes once more. Here in the car might be the only time he would be close enough to fully absorb their wondrous mystery, but the woman kept her gaze fixed on the window, as she had for most of the ride. With a sigh, Seg bade a silent farewell to her and the car’s plush interior, neither of which he was likely to see again, and stepped out into the gathering crowd.Surprised chatter met him. Seg would have been surprised, too, if he’d seen someone from Holtondome step out of a City car.Troy pushed through the crowd, his eyes wider than the rest. “Seg! Where’s the hauler?”“Busted on the road.”“What about the wheat?”“In the hauler.” Seg ground his teeth to keep from adding a “dumbass” that would surely have started a fight between him and his brother. Any other day, he might have welcomed the boredom relief, but fighting in front of the woman with the enchanting eyes would be poor hospitality.Troy shook his head, throwing his sandy curls around like a hair tornado. “It’ll be ruined! Traders are coming tomorrow, Seg. Tomorrow! We need every scrap this quarter.”“I know! Everyone knows! What was I supposed to do? Carry it on my back through a lightning storm? Ask the City folk to throw it in their trunk? I was lucky they even gave me a ride.”“You could have not broken the hauler in the first place! You were racing it again, weren’t you?”Seg couldn’t bring himself to deny it, so he set his jaw and met his brother’s glare. A fight was brewing as sure as the coming storm, whether he wanted it or not.“Of course you were.”Troy stepped closer until Seg could feel his breath. Troy’s upper lip twitched, a sure sign he was ready to swing. He was thirty-one, three years Seg’s senior, but the extra years hadn’t tempered his aggression—especially not against the younger brother with whom he seemed at constant odds.“I don’t know the last time you bothered to check, but Fen’s getting worse,” Troy said. “And she’s almost out of medicine. We barely have enough food to trade for dome repairs as it is. Without that wheat, we won’t have enough to barter for medical supplies, let alone replacement parts for the hauler. Remember that the next time you think about taking our livelihood out for a joy ride!”Troy tensed, clearly expecting Seg to hit him.And boy, did Seg want to. He balled his fists so tight that his nails bit into his palms.The rear driver-side door opening—followed by a fresh round of chatter—was the only thing that stopped him.The woman swept her enchanting eyes over those gathered with the same interest she’d shown Seg, which was none at all. In contrast, the crowd gawked at her, bewitched, just as Seg had been when he’d first seen her.Hap shuffled forward with a warm smile. “Welcome to Holtondome. Hap Holton, at your service.”In an un-City-person-like move, the woman extended her hand in greeting. Hap’s smile faltered, but he took it just the same.“Fi,” she said. “Thank you for having me in your dome.”

​​Ryan Southwick decided to dabble at writing late in life, and quickly became obsessed with the craft. He currently lives in the San Francisco Bay Area with his wife and two children.
His technical skills as a software developer, healthcare experience, and lifelong fascination for science fiction became the ingredients for his first series, The Z-Tech Chronicles, which combines these elements into a fantastic contemporary tale of super-science, fantasy, and adventure, based in his Bay Area stomping grounds. 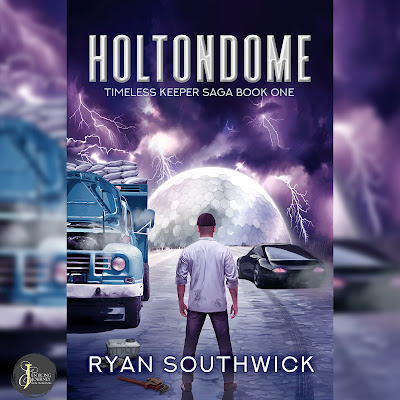