That’s what my teammate’s sister-in-law told me after our one-night stand.

I didn’t expect to see Hollis again, let alone end up raising a child with her.

We set some ground rules–we’ll raise the baby together, but that’s it.
No relationship, no future, and definitely no kissing.

But the more time we spend together, the harder it is to keep track of where the lines were once drawn.

I’m known for my one-timer on and off the ice, but this game with Hollis just got a lot more complicated…

Download today or read for FREE with Kindle Unlimited

TEAGAN HUNTER is a Missouri-raised gal but currently lives in South Carolina with her Marine veteran husband, where she spends her days begging him for a cat. She survives off coffee, pizza, and sarcasm. When she’s not writing, you can find her binge-watching various TV shows, especially Supernatural and One Tree Hill. She enjoys cold weather, buys more paperbacks than she’ll ever read, and never says no to brownies.

The heroine(s): Hollis Kelly – recently divorced because she found out her husband was cheating on her and had been since before their wedding. Hollis is not looking forward to being in her sister’s wedding to a pro hockey player.

The Hero: Cameron Lowell – an NHL Professional Hockey player. Lowell is totally anti-relationship after his former on again off again puck bunny love interest pretended she was pregnant and got him to propose only for him to find out later she just wanted to be the wife of a pro hockey player.

The Story: Hollis and Lowell meet at his team-mate and her sisters wedding rehearsal and she hates him from the start, but at the wedding they have a one night stand and months later Hollis discovers she is pregnant with Lowell’s baby. 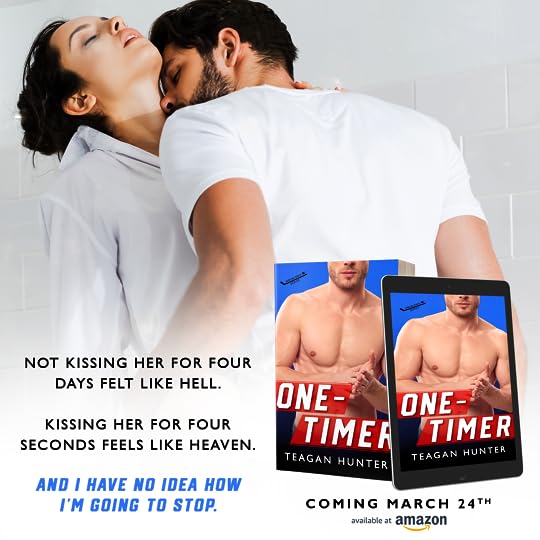 “In ice hockey, a one timer is a shot that occurs when a player meets a teammate’s pass with an immediate slapshot, without any attempt to control the puck on their stick.” – Wikipedia

“I am not about to hurl myself into another relationship. Getting burned like that once was enough for me, thanks. So I keep it light and casual in that department. The one-timer isn’t just good for the ice. It’s pretty much how I get by.”

I really love sports romance, especially hockey and football since those are the only two sports I can really get into. I mean how can you not like hockey players. They are good with their sticks and aren’t afraid of a fight.

Teagan Hunter’s writing is great. She is terrific at world building and always has a great supporting cast as well as likable main characters. She injects humor and romance into the story as well as some steamy intimate scenes. It was also nice to see Zach and Delia from Let’s Get Textual show up and talk about their goats for a bit.

This book had all the great elements I like in sports romance and I liked the fact that the two main characters are able to enjoy getting to know each other despite both of their backgrounds. They both have some emotional turmoil going on but not so much that it got depressing or too heavy.