Audiobook Review: The Song of Achilles by Madeline Miller. ⭐️⭐️⭐️⭐️⭐️

The Song of Achilles by Madeline Miller

“Name one hero who was happy. You can’t.” 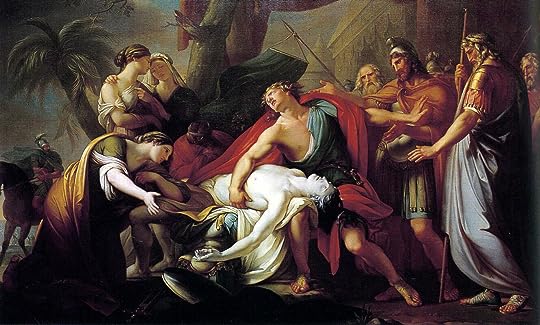 Patroclus was the son of a king. He was thought to be slow like his mother and his father hated him. At 10 years old he accidentally killed a boy after finally fighting back when he was bullied, knowing that his father thought him to be a coward and hadn’t failed to say so in public, the sons of noblemen had no fear of repercussions from picking on him. Patroclus was banished to Phthia where he meets Achilles who is the son of King Peleus.

Despite the fact that Achilles was the son of the King and a Goddess, a golden child at the palace and Patroclus was one of many banished sons of Kings that found shelter at the palace of King Peleus, the two became friends. I enjoyed the story of the two boys growing up as best friends in the palace, who obviously had deeper feelings for each other.

This book was told from Patroclus’ point of view. It shows how his feelings for his friend grow and develop. Achilles’ mother, the goddess Thetis wanted him to become a God and didn’t approve of the relationship between the two of them. There is quite a bit of yearning and angst in this story, but I liked it. I will certainly want to watch the move Troy as soon as possible to see the similarities and differences between this story and the movie. I know there are people who didn’t like Brad Pitt as Achilles, but I can totally picture him in the scenes from this book

I have to say I loved this book. It had all the feels. It was steamy and romantic and you couldn’t help but see the love these two had for each other and feel for them as they yearn for each other and fight to keep their romance secret. Patroclus worried so much about hurting Achilles honor. They way they thought at the time was so backwards.

“As Odysseus said, many boys took each other for lovers. But such things were given up as they grew older, unless it was with slaves or hired boys. Our men liked conquest; they did not trust a man who was conquered himself.”

Though Achilles himself was not as worried about what others thought of them as Patroclus was.

“I would still be with you. But I could sleep outside, so it would not be so obvious. I do not need to attend your councils. I—’
‘No. The Phthians will not care. And the others can talk all they like. I will still be Aristos Achaion.’ Best of the Greeks.
‘Your honor could be darkened by it.”
‘Then it is darkened.’ His jaw shot forward, stubborn. ‘They are fools if they let my glory rise or fall on this.”

Frazier Douglas did the narration on this and he was brilliant. He has a British accent and a very appealing and well modulated voice that I thoroughly enjoyed. This was a perfect book to listen to via audiobook and is a true 5 star read. I knew how it would end from my myths and legends class in college, but I still had tears in my eyes.