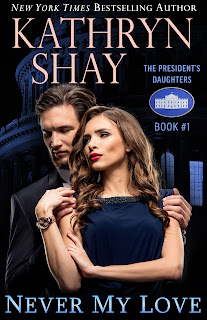 He finally finds a woman he can love but she plans to be the President of the United States…Annalise Masters Manwaring, one of the twin president’s daughters, knows what she wants and how to get it. But when she meets cranky, arrogant Luke Branson, she’s derailed in a big way. She has to choose between him and her political career. Luke, wounded by his brutal past, knows he’ll never fit into her life. Both have impossible decisions to make.

President James Manwaring sat across from Annalise in her swank Foggy Bottom condo, looking youthful at sixty-seven. His face sported only laugh lines around his eyes and mouth. “I like your place, but I wish you’d listened and chosen a big building so you could be on an upper floor.”

She kissed his cheek. “I know, Dad. I wanted a deck. A backyard.” She handed him coffee. “Let’s sit.”

“So, sweetheart, how are you doing?”

She took one of the other white leather couches across from him. “I’m good. You? How’s the foundation?”

Her parents had set up a foundation to eradicate human slavery. They worked parttime on an awareness campaign and fundraising.

He watched her with those searing green eyes that she’d inherited. “We’re well. Our work is satisfying. Tell me about your new job.”

“I love it so far. I’ve always been interested in The Justice Project.” A national political action organization that supported candidates for their party’s elections. “And I’ve donated to it for years.”

He could always tell when something was wrong.

“One of the founding members, Luke Branson, voted against me. The women on the project told me to be careful around him. He’s not a founder, but started there seven years ago, and is technically my superior.”

“Why would he do that? Your qualifications are impeccable.”

She shifted in her seat. “People tend to think I’m unqualified to do anything but cut ribbons and be pretty.”

“That’s not fair. After you got your law degree from Georgetown, you clerked for two years with Tom Anderson.”

“Who is a judge you appointed.”

“I’m sorry then, honey. I regret my part in his veto.”

“Don’t be. I’ll never apologize for being the president’s daughter.”

The former president chuckled. “I like your pride in our family.”

Sighing, she sat back. “As for the job, I signed on for four days so I can still take pro bono cases on Fridays at my old firm.”

She stood. “I think the banana bread you love is cooled by now.”

As she passed him, he grabbed her hand. “You don’t have to pretend everything’s going well with your life, honey.”

“I’m not pretending. I want to follow in your footsteps and this is the path. I’ll be right back.”

Annalise went to the kitchen and cut the bread. The sweet scent of sugar and bananas was heavenly. When she returned, her father was staring out at the D.C skyline. He sat again when she did. “Now, give me a slice.”

She bit into one, too. Contrary to Hannah, her younger sister, who ate organic foods, Annalise wasn’t that rigid, though she did use all-natural ingredients for baking. She envied her sister, who’d chosen a different path than she.

“What are you thinking about?”

A smile spread across his tanned face. “I heard from her yesterday.”

“Yeah, she’s called me twice and both times, I couldn’t get back to her. How is she?”

“She was fixing her furnace.”

Annalise grinned at that. Hannah had said no to college, a scandal for the president’s child. Instead, she went to trade schools—got an electrician certification, one in plumbing, another in carpentry and one in construction, for which she was required to work on a building site. Annalise remembered seeing a picture of the Secret Service standing by in their suits and hard hats. “She’s something, isn’t she?”

Both of those sisters had moved to upstate New York. Hannah used her trust funds from her mother’s parents to buy the farm and Sasha used the money to buy a dance studio in downtown Rockford. Annalise had purchased an estate in Maryland where she planned to move sometime in the future. Andraya had saved hers.

“Well, that’s why Sasha opened her dance studio in Rockford. I wish my twin hadn’t gone halfway across the world to work.”

“Andraya loves Casarina and teaching. She got close to the Gentileschis when she spent her senior year at the Marcello schools.”

“I know. I’m going over to Italy to see her when I get some time off.”

“I adore the fact that you’re all so different.” Her father was the only person she knew who used the word adore naturally.

She checked her watch. “I’m afraid I have a meeting in a half-hour.”

“Said the man who sat in the Situation Room on a number of weekends.”

An expression which had charmed America when he first ran for state office, then the House of Representatives, then the Senate and finally the presidency spread across his face. “I know. So, I won’t harp. But your mom and I will be more available to you now.”

“Give her my love.” Annalise and Karen Masters were very close.

She stood with her father and walked him to the door. Hugged him fiercely. “I love you, Daddy.”

She opened the front door to find his two Secret Service agents standing at attention. Eddie Cramer and Milt Smith had been and still were her father’s guards, as her dad was entitled to protection for life. And now that he wasn’t president, all three of them had loosened up somewhat, were friendlier and wore casual clothes.

She rolled her eyes. “You didn’t call me that when one of the boys I dated took me out on his motorcycle, Eddie.”

He smirked. “Okay, Shining Star.” The code name she’d been given by her protectors.

“Goodbye, everyone.” She went back inside and her cell rang. She clicked on. “Hello.”

“Annalise. Where are you?” Luke Branson’s tone was annoyed.

“You’re late for the meeting.”

“It isn’t for another half-hour.”

“The meeting started at nine!”

Hell. “I’ll be right there.” She didn’t live far from the Lincoln building. “I’m sorry, Luke.”

“I said I would.” She disconnected abruptly. That guy got under her skin. He did it intentionally, but to be fair, she was late, and she might have been as impatient as he. Grabbing her briefcase, she headed out.

Fifteen minutes later, Annalise walked into a large conference room of the building where The Justice Project was housed. Housed on two floors, it spread out in offices to hold fifty employees and several large and small conferences rooms.

“I’m sorry, Harold. No excuses.” Except that she was with the former president.

“Not to worry. It happens. We’re divvying up some projects. You and Luke are taking candidate assessment for the 204th district in Pennsylvania.”

Damn, she was going to have to work with the man after all.

Luke Branson watched Annalise Manwaring walk into his office with all the confidence in the world. She’d handled her lateness with aplomb. Once inside, she glanced around at the two desks adjacent to each other and a small table and chairs by the window on the streets of D.C. Recessed lighting made the area ideal for working. “Where’s everybody else?”

“It’s you and me. Harold assigned us.”

“Why didn’t you object?”

“Because I’m a team player.” He held his temper. “You heard I was reluctant to hiring you.”

“It’s important that The Justice Project remain impartial. I didn’t want your appointment to seem like nepotism. But I was outvoted, so here we are.”

“That’s true.” He motioned to the small conference table. “Would you like coffee?”

She sat, pulled down the skirt of the sage-green suit she wore and took her slim laptop out of her briefcase.

She was a beauty, all right and, unfortunately, he’d been mesmerized by it for years. He’d envied her when they were both at Georgetown. She’d sailed into law school, while he had to delay a law degree to save up for tuition. In the end, he got a masters in marketing and finance which he excelled in. He was embarrassed by still, at thirty-six, having remnants of negative feelings about her.

“Do I have banana bread on my face?”

“I baked some this morning.”

Ah, he got it. Rumor had it President James Manwaring loved his daughter’s banana bread, a story leaked to the press to underscore his happy family life. That didn’t sit with Luke at all, since his family was never much a part of his life.

“You were late because you were baking bread for your father?”

“No, I was late because I got the time wrong.” She held his gaze. “Can we get to work?”

“If you’re finally ready.” He grabbed his tablet. “I’ll send you the candidates we have to choose from.”

Quickly, her tablet pinged. Four candidates were in the running for congress in the November primary in Pittsburg. She read the notes on all of them.

“Hmm, they certainly have different agendas. From a quick scan, I think it’s going to be between Meredith Long and Mark Dawson.”

Meredith was running on LGBT rights, social security and Medicare. She also favored environmental issues and education. Those were the issues Annalise would have chosen, too. Mark Dawson was for steelworkers, ran on his experience in science and technology, highways and transit and the economy. She looked up. “At first glance, I gravitate toward Long’s agenda.”

“Let’s take our time, consider the others and if we chose Long and Dawson, we’ll vet both of them. Then we’ll present them to the rest of the members.”

Man, she was a sassy one. Too bad he liked spunk.

A NEW YORK TIMES and USA TODAY bestselling author, Kathryn Shay has been a lifelong writer and teacher. She has written dozens of self-published original romance titles, print books with the Berkley Publishing Group and Harlequin Enterprises and mainstream women’s fiction. One of her firefighter books hit #20 on the NEW YORK TIMES list. Her novels have been serialized in COSMOPOLITAN magazine and featured in USA TODAY, THE WALL STREET JOURNAL and PEOPLE magazine. There are over ten million copies of her books in print and downloaded online. Readers call her work heartwarming. 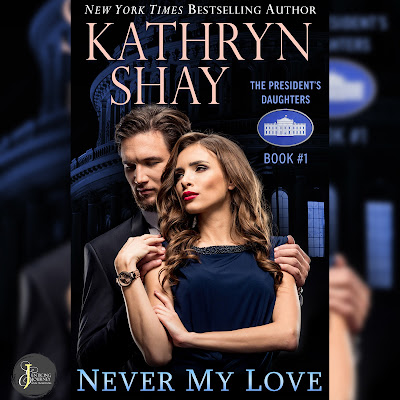