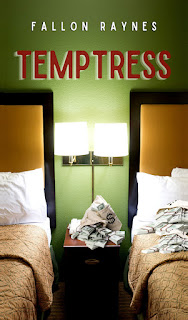 Temptress is a short story originally featured in the best seller: Make Them Pay – A Thriller Anthology.
When local bars become the hot target for thieves, Detective Reyes is reminded that temptation comes in many forms.
Kent, Grady, and Red have the bait and switch routine down to a science. Although, Red is the newest member to the tiny crew, she’s the biggest weapon in their arsenal. She’s hot as sin and the poster child of distractions. Kent and Grady knew she was going to help them pilfer all the dive-bars in the town they’d set their sights on. It would be easy money with her in the spotlight.
There was just one small problem. They hit Lucky’s bar first. A bar that was owned by the father-figure of Detective Reyes, of the Midland Law Enforcement Center.
Detective Ricky Reyes is on the hunt to catch the thieves that stole what wasn’t theirs. Will he catch the band of thieves before they skip town? Will justice be served?

Chapter 1A vision in a red dress and spiky, black heels fluttered into the bar. Her short, flared skirt danced at her long legs from the rush of the evening breeze coming through the open door. She brushed a strand of flame-red hair behind her ear. The door closed, darkening the room. The lady in red stood there at the entrance as she searched the dimly lit surroundings. Behind the bar was Frank, the owner of the outdated bar called Lucky’s. He stood frozen with his gaze on the woman, his mouth agape.Grady smirked, thinking the guy’s sad old eyes had probably never seen the likes of this gal. His gal, in fact, and aptly nicknamed “Red,” her favorite color.Finally, she found what she was searching for—or more accurately, whom. Grady grinned and made a “tipping of the hat” motion. Red’s full lips turned up in a smile as she sashayed over to him. He held out his arms, and she threw herself into his embrace. Her skirt twirled up as he swung her around a few times before setting her down for a kiss. He sucked in a deep breath of air and tasted her sweet perfume. He looked around, noticing the patrons at the bar and pool table were just as enthralled with them as he had hoped they would be.She pulled herself away and blushed demurely. Ah, she’s good, Grady thought. He steadied her and offered the chair next to the pool table. The sharp smacking of the balls resumed. He smirked, winked, and then headed to the bar to get her a drink and refill his whiskey.When he returned, he gave her another quick wink as he set an icy mug of beer in front of her. She took a quick sip and seductively licked the foam off her lips. He had to admit, Red was hard to ignore. And that was exactly what they wanted.Her grand entrance had actually worked. No one had seen Kent come in and slip to the back office. Their plan was in motion. When her knees started to bounce slightly—a hint that she was getting anxious—Grady pushed down on them gently. He took his thumb and started tracing circles on the fair skin of her inner thigh.He nodded slightly toward the bar, and she casually turned to look in that direction. The bartender’s eyes locked with hers, and she ran her tongue along her top lip while Grady’s hand wandered up her skirt. She was definitely the main attraction this evening. Grady continued the play, stroking the inside of her leg with his rough hand. His phone buzzed in his pocket—once, then two more times.That was the signal. Show time. Grady slid Red’s chair closer to him, put his arm around her back, hand on her shoulder. He lightly squeezed three times to relay the message. Red stiffened, and he looked directly into those green eyes and gave her a smile of assurance. Everything will be fine.

Fallon Raynes is a paper pusher by day, writer by night. Writing has been in Fallon’s blood for as long as she can remember. Short stories and poems kept her mind at ease earlier on. Life’s adventures have swirled in her mind to create some exaggerated stories that she’s excited to put to paper and share with the world. Her first published thriller novel will be released soon. To relax, Fallon enjoys watching the ID and Hallmark channels, reading, and the outdoors.
Fallon resides in lower Michigan with her husband and fur-baby.