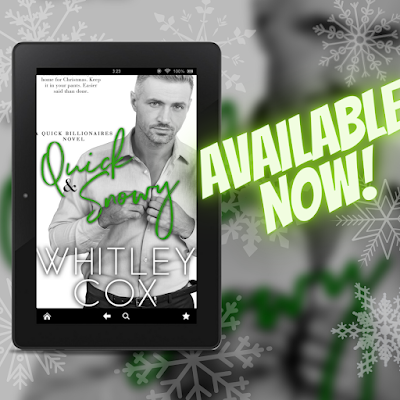 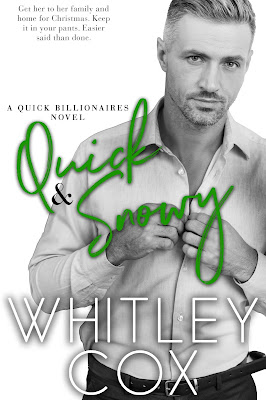 Get her to her family and home for Christmas. Keep it in your pants. Easier said than done.
Retired SEAL and now special operative, Barnes Wark just wants to finish his current job—find the long-lost McAllister sister—then escape to solitude in his beachside cottage. He’s not one for fuss, people or holiday cheer.
But for the last four months, every lead has been a dead end, and he’s getting pissed.
Hiding away in a seaside village in beautiful Portugal, he finally finds who he’s been searching for.
Unfortunately, she’s not leaving without a fight and that pisses him off even more.
Dr. Brier Scofield allows herself one indulgence in life and that’s one three-week vacation every year. With no family, she’s dedicated her life to curing the disease that killed her mother.
So when a handsome, but frustrating, stranger shows up and says she has family waiting for her in the snowy mountains, she doesn’t know what to think.
Going from no family to a ton seems daunting and something this quiet, introvert isn’t ready for.
Barnes doesn’t care if she’s ready or not, he has a job to do—and that job is her.
In more ways than one.

★★★★★ Goodreads Review – “Two of my favourite themes are holidays and mystery/suspense; so for me Quick and Snowy was a perfect blend for me.”

★★★★★ Goodreads Review – “If you love holiday romances with some mystery this book should certainly be on your radar.”

★★★★★ Goodreads Review – “Author Whitley Cox gives readers a lovely story around newly found family (it’s huge) and Christmas, then add in two introverts who get each other and discover that there is sizzling hot chemistry between them!”

He pulled the sheet away and watched as a new layer of gooseflesh chased across her skin.He wanted to feel those bumps beneath his lips.Melt them with the heat of his tongue.Setting the plate off to the side, he leaned forward, and from just above her crease, he ran his tongue up the length of her spine, feeling her tremble and shiver beneath him. He ended at her neck and gently bit her shoulder.She relaxed into the bed.Yes.The woman needed to fucking relax.He’d never met someone who was constantly so tightly wound.He’d watched her unravel and loosen up just a bit on the plane when he slid his fingers beneath her pants, but even then, even as she allowed him to bring her to orgasm and suck on her nipples, she hadn’t allowed herself to completely let go.What was “relaxed” Brier like? When she truly allowed herself to be free of worry.He wanted to find out more than he’d wanted to find out anything in a long fucking time.Swirling his tongue over her shoulder and down her arm, he brushed her hair off her face to find her looking at him.The smile in her eyes hit him hard in the solar plexus, and a breath hitched in his chest.But he made sure to hide his physiological response from his face.If she got even a whiff of anything, she could shut down all of this.She couldn’t know that he was beyond having temporary feelings for her. That parts of him wanted to explore this connection, this friendship they had, beyond their time in Whistler.Leaning forward, he pressed a kiss to her forehead.Her eyes closed.He’d made sure to place the plate with orange slices within reach, and while still kissing her, still giving her attention, he reached for a slice, brought it over and squeezed it over her bare back.Starting at the base of her spine, right above her crease, he moved his hand up the length of her body.She inhaled sharply, and her eyes widened.He grinned down at her, then brought the now empty and crumpled orange slice in front of her face.Understanding dawned on her face. But her eyes remained wide.Intrigue and desire replaced the surprise, burning hot and making the green of her eyes intensify in color.He moved away from her face and back toward her butt. Her gaze followed him.He didn’t have to see her eyes to know they were glued to his every movement.He could feel the heat of her stare. Sense the ripping vortex of desire and unease that dueled within her.She wanted this.But she didn’t think she should.“Relax, Bry,” he cooed. Before dipping his head, he swirled the tip of his tongue at the top of her crease for just a moment, then raked his tongue up the length of her spine, gathering the droplets of sweet juice as he went.She stiffened beneath him.He felt her tense.Felt her walls start to go up.She was stepping out of her comfort zone, and he needed to let her know that it was okay to do so. That she was safe to be herself with him. Safe to let go.When he reached the back of her neck, he bit down just hard enough to send her a message. Then he slid his hands over hers, which were flat above her on the bed, and he covered her body.He didn’t put all of his weight on her, but he put a bit.“You are safe, Bry. Safe with me. Nobody can hurt you here. Nobody outside of the people in this room need you for anything other than for your desires to be fulfilled. Turn off your worries. Let yourself relax. You’re safe to be yourself with me.”Quick puffs of warm arm fled her flaring nostrils.He glanced at her. She looked up at him.Both of them were keenly aware of his erection laying against the crack of her ass. Particularly her, because when he lowered himself onto her a little more, she clenched her cheeks.“We won’t do anything you’re not comfortable with, Bry. But something tells me you want to do more than you’re willing to admit … to me or even to yourself. Give yourself a gift for Christmas. The gift of not overthinking. The gift of just going with the flow. Of giving in to your basest, most animalistic and carnal desires.”She shivered beneath him when he said that last bit.“You might just surprise yourself with how much you enjoy this other side of yourself. How freeing it is.” He brought his mouth down next to her ear. “How much you like to be dirty.” 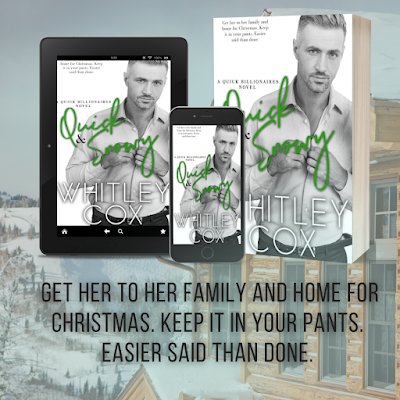