Pretty Sinner: A Dark Mafia Romance by B. B. Hamel 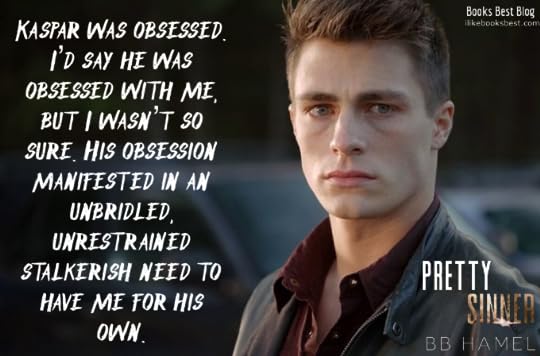 The heroine: Penny Servant – she grew up a mafia princess and was stolen from her family by Kaspar who has been obsessed with her since the day they met. Penny wants nothing to do with the Oligarchs and their business. Her brother Darren is the oligarch of her family and her sister Erin works with him.

The Hero(s): Kaspar Baskin – a ruthless mafia oligarch with unlimited funds. He took the object of his obsession captive and wants to make her his wife. He refuses to let her go, but otherwise treats her good. He likes willing women in his bed so is content to wait for Penny to change her mind about him.

The Story: Penny and Kaspar met at University when he was a senior and she was a freshman. He immediately became obsessed with her and wasn’t afraid to show it by basically stalking her, calling her many times a day and continually asking her out. Now he has her and will not even think about letting her go.

“The Oligarchs were powerful. They ran mafia families from the shadows and funded illicit activities for fun and profit. Oligarchs were deeply connected and universally feared.”

This book was a bit different from your standard mafia romance in that the college years were told for the most part from the POV of Alice, who is the roommate of Penny and who is there for nefarious purposes. She is a psychopath and knows it, her relationship with Penny gets stranger as time goes by. And boy is Alice ever cuckoo for coco puffs. She is cra-cra in a big way, and it is definitely fun to read.

The rest of the book is told in Dual POV (Kaspar and Penny), there is a whole storyline about Kaspar and the oligarchs. Kaspar is determined to make moves that put him on top with some of the other Oligarchs and that means breaking some of the old rules and using people to his advantage. Kaspar comes across as a monster at times, but he is likable as well. So I can see why Penny can’t figure out what she wants or feels.