‘Palm trees, a sexy bodyguard, flying bullets, and an adorable dog! This book has it all covered. Perfect way to forget about real life. Ava and Jackson are an opposites attract bodyguard romance couple I won’t soon forget. Five stars for this fun and steamy romantic suspense set in the ritzy town of Palm Beach, Florida.’ — Goodreads Review

‘This was another fabulous romantic suspense novel! … I look forward to reading the next book in this exciting and endearing series.’ –Floraljoy on BookSprout

He’s the security expert her overprotective father hired.
She’s the headstrong former prosecutor tempting him to break all his rules.
Together they have chemistry hotter than the Florida sun.
It was the worst day of Ava Barton’s life. She’d been fired from the US Attorney’s office in Miami and learned there might be a contract on her life. The police and the FBI can’t protect her from “might,” so she begrudgingly takes refuge behind the walls of her parents’ oceanfront estate in Palm Beach.
Jackson King protects the rich and famous while they play in the Florida sunshine. When the powerful Barton family needs a bodyguard for their daughter, he steps up to take the job. But the platonic working relationship Jackson expects goes off the rails. And, against his better judgment, he wants Ava as more than a client.
When Ava’s life is at risk, Jackson’s need to claim her as his own threatens to boil over. Can he ignore his desires until the authorities catch the person behind the dangerous attacks? Or will her family send him packing?
This book has a sun-kissed ex-military bodyguard with an adorable dog and a workaholic heroine with an unpredictable temper. Action. Danger. Humor. Steam. And a storybook-worthy happily ever after.
Palm Beach Bodyguard can be enjoyed as a standalone but it is book three of the Protecting Love series.

“Zombies or bullseyes?” Jackson asked while poking the flags into the barrels of the two weapons on the table.

He held up two paper targets. One was a typical bullseye with rings and crosshairs. The other was a picture of a killer zombie with targets over its head and chest.

Laughing, Ava pointed at the zombie, of course. If she was doing this, she might as well get ready for the apocalypse. The high pitch of her laughter made her realize how tense she was. The strange environment had her so far outside her comfort zone she couldn’t even see it anymore. She wiped her sweaty palms on her jeans and let out a big exhale.

“Most important,” Jackson said. “One, never put your finger on the trigger unless you’re ready to shoot. And two, never point the gun anywhere but downrange. Got it?”

Whatever else he told her today might get jumbled in her head, but she would never forget those two rules.

He looked the smaller gun over and offered it to her. He held it down and away from them, handling it as if it were loaded. “It’s empty. This is a .22-caliber revolver. Smaller gun, easy to handle, good place to start.”

Again, she dried her palms on her jeans before she wrapped her right hand around the grip on the revolver, mimicking Jackson’s careful handling. When he let go, she almost dropped the gun. It was heavy, really heavy. She was careful to keep it pointed downrange as she got accustomed to the feel of it in her hand. Her heart was beating faster, and she had to bite her lips to contain a nervous giggle.

Jackson had strung up one of the ridiculous zombie paper targets and sent it downrange about ten yards.

Next thing she knew, he’d stepped up behind her. His chest grazed her back. “Lift your arms. Two hands on the gun.” He cupped her hands in his, tightening her grip on the gun. His warm breath tickled the hairs on the back of her neck. An image from last night’s fantasy popped unbidden into her mind: his hands spreading her thighs.

One of his hands skimmed down her arm to turn her hips square to the target. “Feet just less than shoulders width apart.”

Her nipples hardened against the smooth satin of her bra. She took a calming breath, and her lungs filled with Jackson’s unique smell. The scent of a day spent on the ocean. Tangy salt air, sunscreen, and cool breezes. The scent matched his golden tan and sun-streaked hair.

His hand stayed on her hip, searing through the lightweight sweater she wore.

“Good,” he said. His freshly shaven cheek brushed against her temple. She had the overwhelming urge to lean back and rub against the gorgeous chest she’d admired all morning in the gym.

She’d lost her mind. This wasn’t the time to think sexy thoughts about her hunky bodyguard.

“Now curve your index finger around the trigger. You’re going to try a dry fire to get a feel for the trigger.” His other hand fell to her hip.

She refocused on the gun, trying to keep it steady. And she pulled the surprisingly stiff trigger back. A click sounded, and she removed her finger from the trigger. “Like that?”

She focused on the trigger and tried to ignore the feeling of Jackson leaning closer. She shifted her hips, frustrated there was no way to rub her thighs together while standing in proper firing position. Her ass grazed his crotch, and he inhaled sharply.

Behind her, he cleared his throat and stepped back. “Ah, put it on the table, and I’ll show you how to load it next.” His voice was deep and extra husky. She wasn’t the only one feeling something. She set the gun down and reminded herself again this was a working relationship—not a first date.

Loading was pretty simple. She got comfortable with that quickly, and Jackson reminded her of the rules and etiquette for the range while he had her load and unload the gun a few times. Now that it was time to shoot, he told her to remove the little flag from the end of the barrel.

“Ready for the real thing?” He waved her to the front of their station and pulled on his earmuffs.

The silly zombie waved in the breeze, ten yards in front of her. No problem. Eyes stay open, look at the target, squeeze trigger. She pulled down her earmuffs, adjusted her eye protection, and got in firing position.

That was a lot more everything. Louder, more kick, and way more exhilarating than she’d have ever guessed. Her fast breathing and racing pulse echoed in her head thanks to the earmuffs.

Jackson’s hand curved around her shoulder, and he lifted one side of her earmuffs. “Nice shooting.”

She scanned the target; her bullet had nipped the zombie’s left hand. Hmm, she wasn’t going to survive the apocalypse if that was the best she could do. Five shots later she finally managed to tag the ghoul mid-chest. Unfortunately, she’d been aiming for his brain.

Jackson ran through pointers on aiming and breathing. He was as excited to teach her as she was to learn. That zombie was going down!

She took up her stance and waited for the range officer to announce the range was hot again. The first shot went wide, but number two, bullseye! Dead center in her zombie’s gooey green brain. Empowered? Hell yeah, she felt empowered. Her dad was a genius.

Jackson’s whoop of triumph was loud enough for her to hear through the earmuffs. Smiling, she squeezed off the rest of her rounds. Her hands shook a little when she set the gun down. She’d done it. Ava 1 – Zombies 0.

Jackson pulled in the target and unclipped it from the cardboard backer. “Souvenir?”

She eagerly took the tattered paper target and carefully folded it before sliding it into her back pocket.

A few more rounds and a few more dead zombies and her trembling arms were ready to let Jackson take a turn firing his larger 9mm semi-automatic. She stood back, admiring the scene. And what a scene it was. He handled the weapon with confidence. Sexy man doing sexy things. And the visual of his hands wrapped around the cold black steel… She shook her head to clear out the inappropriate thoughts.

Afterward, Jackson put away their equipment while she swept up their spent shell casings.

Laughing, Jackson directed her to head for the Bronco. “Come on, Lady Rambo, let’s go find some lunch.” 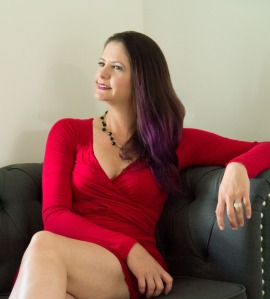 Michelle introduced herself to romance novels by stealing them off her mother’s bookshelf. She got caught red-handed when she destroyed a new book by dropping in the bathtub before her mom could read it. From stolen paperbacks to an overloaded iPad, Michelle’s passion for reading grew into her debut contemporary romance novel: Savannah Run.
She lives in South Florida with her real-life prince charming, two dogs, two horses, a cat, and Daisy the donkey. Most evenings, you will find her floating in the pool, enjoying a cocktail, and working out the plot of her next book with her husband.
Get your fix of happily ever after with a shot of action and adventure. 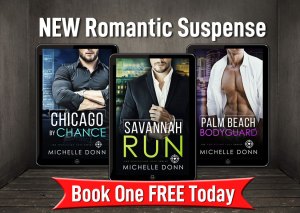