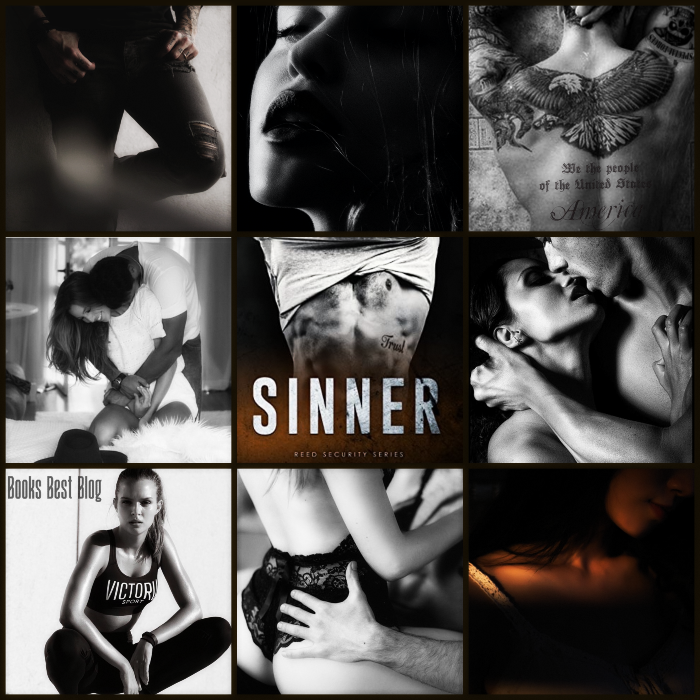 The Hero(s): Mark “Sinner” Sinn – former special forces, now works for Reed Security. He is a playboy who hasn’t been getting along with his boss Sebastian “Cap” Reed. Sinner is friends with Maggie, who is Cap’s woman and Cap is very possessive.

The heroine(s): Cara – six years ago she was kidnapped and held by a serial killer and now is suffering from severe social anxiety disorder. She is doing whatever it takes to get rid of her anxiety but right now nothing seems to be working.

The Love Story: Sinner and Cara meet at a restaurant where Cara is having an anxiety attack and when she passes out, Sinner is there to catch her.

I unconventionally started this series on Book 21, which is fine since most can be read as stand-alone books. Though I loved them so much I had always planned to start at the beginning. Sinner was one of the books I couldn’t wait to read since he is such a great character. The blurb in this book also says it would be best to read the For the love of a good woman series first since many of the characters are connected. I have read most of that series, but it was quite a while ago so I don’t remember much. However I didn’t feel like I was missing anything. That is one thing Giulia Lagomarsino is great at.

I liked both Sinner and Cara as characters and these books always have some sort of dangerous situation brought on by the nature of the work in the Security business. In this one, there was a woman, Vanessa Adams who was the daughter of a billionaire businessman who needed personal security. There is some sort of shady business deal with her father where the other party wants to get her and use her as leverage. Vanessa will be the heroine in a future book as she and Cazzo have some attraction between them.

Overall, this book was great. It wasn’t quite as funny as some of the later books, but it was certainly steamy. I love the supporting characters and the action in the book. The world building is great and the side story was interesting.