Reign of a King Release/Review Blitz

Reign of a King

Nothing is fair in war.

Jonathan King is every bit his last name.

He’s also my dead sister’s husband and way older than me.

When I first met him as a clueless child, I thought he was a god.

Now, I have to confront that god to protect my business from his ruthless grip.

Little did I know that declaring a war on the king will cost me everything.

When Jonathan covets something, he doesn’t only win, he conquers.

Now, he has his sights on me.

He wants to consume not only my body, but also my heart and my soul.

I fight, but there’s no escaping the king in his kingdom…

👑 PURCHASE Reign of a King 👑

To celebrate Reign of a King’s release, Rina Kent is giving away a paperback! Head to her Facebook page to enter: https://www.facebook.com/rinaakent/

Rina Kent is an international bestselling author of everything enemies to lovers romance.

Darkness is her playground, suspense is her best friend, and twists are her brain’s food. However, she likes to think she’s a romantic at heart in some way, so don’t kill her hopes just yet.

Her heroes are anti-heroes and villains because she was always the weirdo who fell in love with the guys no one roots for. Her books are sprinkled with a touch of mystery, a healthy dose of angst, a pinch of violence, and lots of intense passion.

Rina spends her private days in a peaceful town in North Africa daydreaming about the next plot idea or laughing like an evil mastermind when those ideas come together.

Don’t forget to Sign up to Rina Kent’s Newsletter for news about future releases and an exclusive gift.

My Review of Reign of a King

Reign of a King by Rina Kent

Jonathan is a cold SOB but you can’t help but like him!

The Anti-Hero: Jonathan King – Aiden’s Father and Levi’s Uncle. Jonathan was married to Alicia and has had a rivalry with Elsa’s Father Ethan Steele since they were young. Alicia suffered from depression and possibly other mental issues and died when Aiden was young.

The heroine: Aurora Harper (a.k.a. Clarissa Griffin) – Alicia’s half sister. Alicia came from a wealthy family but Clarissa was raised by her father and had a very non-traditional upbringing since it was just the two of them.

The Love Story: Clarissa has been in hiding since not long after Alicia died. Something happened between Clarissa and her father Maksim and Jonathan tried to find her but hit a dead end. However, she shows up at Aiden’s wedding and is now known as Aurora. She is the spitting image of Alicia (Jonathan’s dead wife). 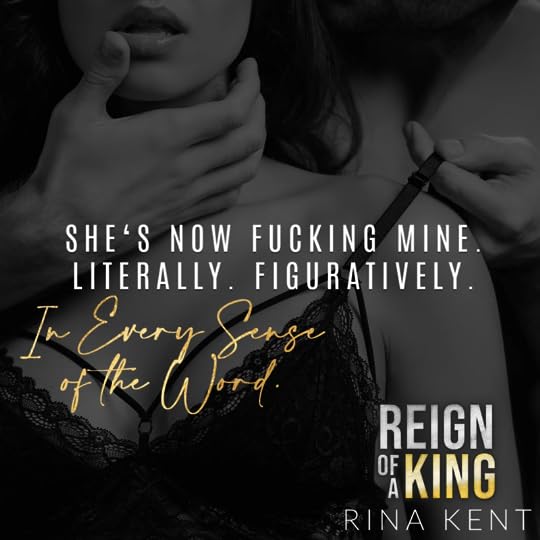 Jonathan is all about winning and control. He sees Aurora at his son Aiden’s wedding trying to make some kind of business deal with his rival Ethan Steele, so he is determined to undermine the deal so he comes out the winner. Jonathan puts Aurora in a situation where she either agrees to do what he says or he will put her out of business, which includes putting all of her employees out of their jobs.

Jonathan is definitely dark and Aurora finds herself drawn to his darkness. She likes the kinky things he does and she is attracted to him despite her misgivings because he was her older sister’s husband. This book is super steamy and Jonathon is extremely dominant and all alpha male! I liked the fact that Aurora could hold her own and always stands up against what he wants her to do. Even though much of the time she seems to be purposely doing things to ensure his punishments because she likes them.