Here Lives a Corpse by C.L. Matthews is now live!

Secrets, bloodlines, the price to pay.

Life doesn’t promise anything but existence.
Losing Cass proved that.
Everyone thinks I’m crazy.
Corpse.
Freak.
Vampire.
They called me the one who never overcame the loss of her brother, the outcast, the least likely to succeed.
But what about their lies?
He jumped. He wanted to die. He killed himself.
When will they stop?
Unraveling the secrets they founded this town with seems impossible.
Detangling the bloodlines that weave the very essence of Arcadia Crest might actually kill me.
Forgetting the little details I’ve erased from my memories as a result of love could be the catalyst of my entire story.
Death brought me hatred.
Hatred drove me to them.
They touched me only in secret.
All stories end in blood, but an oath was never part of that equation.

Here Lives a Corpse is book one of a five-part series.

You do have to read all to understand. Each one ends on a cliffhanger.

Download today or read for FREE with Kindle Unlimited!

C.L. Matthews lives in lala-landia with her husband and invisible friends. She wants to riot the lack thereof authentic Mexican food in her state, but she’s an introvert at heart. She enjoys tacos, Red Bull, and warm water because she’s crazy. CL’s an oddball, and realizes it’s been mentioned before, just go with it. Her joys in life consist of writing unconventional romances, making book covers, causing havoc to her reader’s hearts, and genre-hopping when she needs a change of scenery. She’s a special kind of weird and enjoys every moment of it.

My Review of Here Lives a Corpse

So wonderfully dark and twisty! 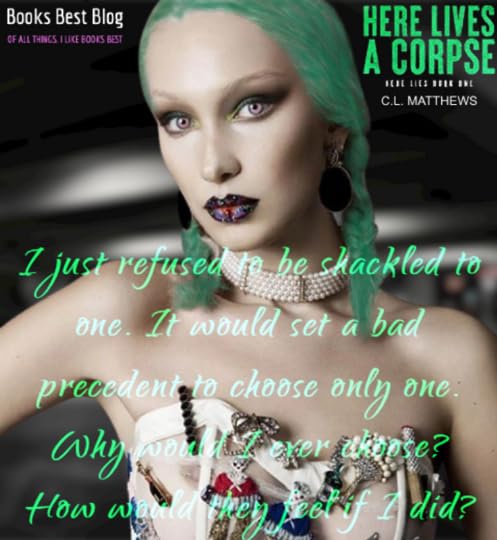 The heroine: Colton Hudson – Her brother Cassidy died under mysterious circumstances last year and she believes the guys from student government helped cover it up. When they didn’t show up at his funeral she wrote them off and fell into a deep depression, she was completely numb, and couldn’t function. Her two moms couldn’t bear to look at her because she looked so much like her brother, so she changed her look, going goth with died green hair, pink contacts, tattoos and piercings.

The Hero(s): The guys from Student Government.
Lennox Deleon (a.k.a. Lux) – President of Student Government. He looks and acts all clean cut like a politicians son, because he is, but underneath he is ruthless.
Tennison Delamore (a.k.a. Ten) – He is tall, muscular and Colton’s favorite, Ten was her brothers friend and she has known him her entire life.
Ross McAllister (a.k.a. Dare) – He can be a total jerk and smile at you with those pierced dimples while doing it, he is built with muscles on top of muscles and tattoos on top of those.
Bridger Clemente (a.k.a. Ridge) – an athlete and an admitted sociopath, he never shows emotion but can bring on the heat.
Jordan Winthrop (a.k.a. Walker) – The newest enforcer on Student Government, he seems like a nice guy, but is one of them.

The Love Story: Colton dated the four guys in Student Government last year and couldn’t decide between them, but when her brother died everything ended. Colton changed everything about her life and decided to go on without the guys. Though she still wants to find out what happened to her brother.

Though the title and blurb are pretty vague, it sounded to me like this would be a paranormal book. It isn’t. They call Colton a corpse, a vampire, and other names because of her new goth look and the fact that she lost so much weight when she went through a depression after her brother was killed.

This is a book about secrets and murder. The hero’s are not heroic in any sense of the word. It contains a lot of flashbacks to previous events. I hate flashbacks when there are so many of them. I know they are a plot device, but sometimes I wish they would just have the previous events first then the rest of the story. As the story goes along and more flashbacks happen, I get frustrated every time. It is always right when something good is about to happen then Bam! We are in a flashback instead of finding out what is going on currently. My frustration doesn’t lower my rating on this book, but I just want to put it out there anyway.

Either way the story was excellent, the surprises revealed were astounding and this was a perfect book to read for Halloween, because it was spooky at times. The ending was a wicked crazy cliffhanger. Overall there were some things I didn’t like and some I felt conflicted about but the story made up for all that and it definitely rates 5 stars!