Sylas Broussard. He’s the hometown golden boy. To the residents of sleepy, southern Palmetto Grove he’s a war hero, and a modern-day saint. My view of him does not quite align with the one they hold.
At ten I couldn’t stand him.
At fifteen I loathed him deeply.
At seventeen I loved him completely.
At eighteen I despised him passionately.
At twenty-eight…Well, it’s complicated.
I have been just fine staying in another time zone, keeping my focus on work and off my past. I would prefer to remain in the office, building on my professional reputation but my sister has called me home to attend her wedding where I know I will see him again.
I still hate him but I’d burn my world to the ground to forget our stupid pact and protect him from the awful truth. Keeping my secret in the past is difficult and getting out of the pact I made is harder still.
Not loving Sylas Broussard like everyone else in our hometown—impossible.
***
Raegan Potter. She’s the former love of my life and the pride of Palmetto Grove turned into an ice queen. She’s been living it up on the east coast in her designer threads and cushy job. I’m betting she won’t think she’s so high and mighty when she’s forced to face me after a decade of radio silence.
Ten years ago she walked away from me without explanation, but not before making me one big promise. She made a pact and I’m going to hold her to it. If she thought I had forgotten, she thought wrong.

There are a few certainties about hanging out with Chick that I had totally forgotten. One, he’s a lady’s man. Two, he loves beer. Three, he also loves tequila. Four, he’s great at pressuring his peers into doing dumb things they really should refrain from. Five, he’s a lot of fun to spend time with.

But lying here now in a T-shirt belonging to Chick that I vaguely recall tugging on after texting my mom to tell her I was too inebriated to drive home and would be staying at Chick’s house, none of the fun from last night matters. This brand of hangover is never worth the fun that precipitated it. As the blackness of sleep slips away, the headache and nausea edge in. Somehow, the scent of coffee snakes through the tequila vapors and coils around my sloshed brain. I moan, squeezing my eyes tighter shut while pressing my fingers to my temple. Chick’s couch is comfy enough but no amount of anything good could have prevented the raging hangover I earned with every shot we consumed at the bowling alley bar last night.

Was it four shots or five?

The eerie sensation of eyes on me has me forgetting all about my throbbing head and roiling gut. My pulse quickens and I do a mental inventory of my body. I’m still in the tee shirt Chick tossed at me last night as I stumbled to his bathroom cellphone in hand. The fleece blanket I only half unfolded across my legs is still where I left it, its slight weight a reassurance that nothing unseemly took place last night. Anxiety is pacing the room in my head.

With careful precision I crack open one eye just a sliver then in an instant my heart slams to a violent, jolting halt.

“Happy twenty-eighth birthday, Rae. Ready to be a woman of your word and make good on our deal?” Familiar chocolate eyes twinkle with amusement as a store bought carrot cake is pushed toward me on Chicken Nugget’s coffee table.

I don’t move a muscle—and scarcely draw breath with my eyes still cracked open only a tiny bit. Sylas fishes a cigarette lighter from his shirt pocket and leans his bulky frame forward, then lights a single white candle on top my favorite cake which he did on purpose no doubt. Of course he’d remember a detail like my favorite cake.

Just like I know he too loves carrot cake with Chantilly cream icing.

The orange flame flickers and dances in the stillness between us. He on one side of the coffee table and me sprawled, hung over and significantly worse for the wear on the other. Oh how flattering this scene is.

“Make a wish, Rae,” he murmurs and something mischievous lurks behind his all American smile. I turn my attention to Chick who is by the entrance to his kitchen, apparently freshly showered as evidenced by his wet mop of dark blonde hair. He’s got a mug in one hand and an apologetic smile on his face.

“No thanks,” I snap at Sylas, hauling myself off the couch. I turn and face Chick. “There for your friends, huh?” I growl at him. He grimaces and clicks his tongue.

“Sorry,” he says back. I snag the candle from the cake and turn it over, jamming the wick end down into the creamy icing. My eyes find Sy’s and I feel homicidal seeing his mouth twitch in amusement. I don’t know where my car is, but walking back to my parent’s house in the Louisiana humidity is far more appealing than sitting here in Chicken Nugget’s living room with Sylas for a moment longer.

I locate my Converse—one by the front door and another closer to the couch I slept on. I jam my feet down into them, not bothering with tying the laces. I grab my small pile of things off the coffee table and make my hasty exit all with Sylas Broussard’s arrogant smirk crawling over my skin. The bastard! And Chick… I can’t sufficiently begin to describe the tongue-lashing he has earned himself. Seeing Sylas in the same room, breathing the same air, feeling the energy rolling off him in waves… it’s all too familiar, too powerful, too much. But, of course, he always was too much. Even back then. Even now, years later. 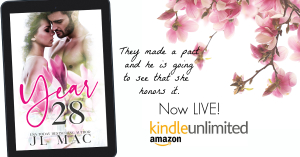 Author, J.L. Mac is the USA Today Bestselling Author of the Wrecked series and several other titles. Beginning with her debut novel in January 2013, J.L. Mac has self-published several novels to date. Having successfully written and published nine novels in seven years, J.L. has become a household name in the Indie community with multiple bestsellers, audio editions and foreign editions of multiple titles. JL admittedly has had a long and sordid love affair with the written word and has loved every minute of it. She drinks too many glasses of wine on occasion, and says way too many swear words to be considered “lady-like.” J.L. lives in El Paso, Texas and spends her free time reading, writing, playing with her four children and living her happily ever after with her very own Prince Charming.