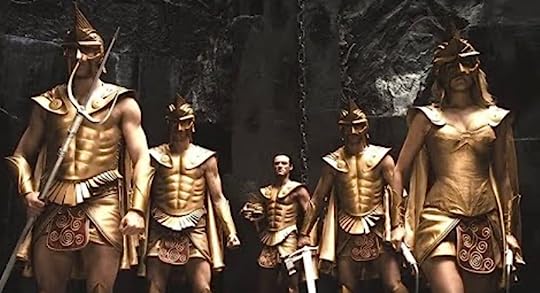 The Hero: Not sure yet. Probably Castor will be the Hero, he is an old friend to Lore (Malora – last mortal descendant of Perseus). Castor is also from one of the bloodlines, descendants of hero’s that are now hunting the Gods while they’re in mortal form. Though Castor trained as a healer not a hunter.

The heroine: Lore – Her family was murdered by Aristos Kadmou, who hunted and killed Ares during the last Agon (see quote below), taking his place and his immortality. Lore has put it all behind her and is no longer involved in the hunts. She now fights men and women in underground fight clubs for money and to keep her feelings of loss at bay. Though she knows if hunters find her she will be a target (not sure why).

At the start of the book I was pretty lost, but later things were explained. I don’t feel like this is giving away spoilers since the few reviews I have read so far of this sample seem to be saying the same thing about the storyline being to complicated and confusing especially since we are dropped in to Lore’s life without the background information and the forward as well as the first few chapters use terminology for events that are not explained fully till later. So I am just going to add a few quotes that help.

“They sat in silence for several minutes after Lore had finished giving Miles a ruthlessly pared-down explanation of the Agon, the nine gods it had been created to punish—including the one whose wound she had seared shut in their living room—and the nine bloodlines descended from ancient heroes chosen to hunt them.
She distilled over a thousand years of history into mere minutes, feeling more and more insane as his face remained carefully blank. It wasn’t like Lore could blame him; hearing herself say the words “For seven days, every seven years, the gods walk on earth as mortals. If you can kill one, you become a new god and take their power and immortality, but you’ll be hunted in the next Agon as well”

Like I said above, Lore is the last mortal descendent of Perseus but basically has opted out of the fight for various reasons. She doesn’t want power or immortality. Though she does want her family avenged. But the killer is a god and even though Gods are mortal for seven days, he has a powerful bloodline and they protect him as well as hunt the other Gods.

However, Castor came to warn her that she is being hunted by the new Ares. Also the God Athena comes to her after being wounded badly and wants her help. Athena gives Lore some information she wasn’t aware of.

I had been wondering where the Medusa hair on the cover came in, until I read that part about her being called “Little Gorgon”. Not that Lore actually has snakes in her hair (at least as far as the sample goes). Also it is said that the Perseides (Descendants of Perseus), were given the Aegis, the shield of Zeus which had belonged to Athena until Zeus created the Agon as punishment for the Gods. The shield was taken when Lore’s family was murdered. The shield has special powers and bore the head of Medusa on the front.

This sample was very good and really just whetted my appetite for the rest of the book. I can’t wait to find out where the story goes. I just love Greek Mythology, add to that a fierce heroine and I am super excited. I definitely will snap this one up the first chance I get and now I really want to dig into my copy of Circe that has been sitting idle on my TBR since I purchased it.