Hard to love. Easy to hate.

Harper
Love causes hurt, hurt causes hate.
I’ve learned this the hard way.
I fell for a guy who is made up of angry bones, a dark soul, and eyes that can see my heart.
One night changed everything.
Now when he looks into my heart, he pulls out the weakness and he uses it to his advantage.
He taunts me, breaks me down, and is trying to destroy my first year away at college.
So why can’t I stay away?
Why am I so drawn to the boy who used to be my friend–the guy who broke my heart, and the man who wants to destroy me?

Axel
All it took was one night for me to see Harper for what she really is–a fake. An imposter who cut me open, forced me to bare my soul, then tossed me aside without even sewing up my black heart.
She was the first girl to ever stir emotion inside of me.
It’s been a year, but the wound is fresh.
I still feel the sting of what she did to me.
No matter how hard I try, I can’t escape her.
Now we are away at college and she thinks she’s still part of this group we’ve had since we were kids.
Little does she know, she’s been cut, and it’s her turn to feel the pain.

Download today or read for FREE with Kindle Unlimited

Add it to Goodreads: http://bit.ly/gr_lh

Rachel Leigh resides in West Michigan and has three beautiful children with her husband of eleven years.

She overuses emojis and lol. Coffee is her guilty pleasure, paired with a nice alpha hero romance novel. Writing is her passion. Her goal is to brighten at least one person’s day with the worlds she creates between the pages of her books.

The Bad Boy and The Good Girl!

If you read the previous book, you know a bit about the relationship between Axel and Harper in High School. They had been friends since childhood and they are in the same group of friends together. They went out for three months in high school, but Axel changed when his Mom died and he wouldn’t let Harper help him.

He treated her like crap while drinking heavily on the night of his Mom’s funeral and she left him because she didn’t want to stand around and be treated like that. She hadn’t meant to break up with him, but he took it that way and has been treating her like the worst possible bully ever since.

He hates the fact that they are attending the same college, hates even more the fact that she is living in the house across the street and that his friends are her friends too. He tried to get them to turn against her but they wouldn’t so she is everywhere and she makes him feel.

I like the fact that so much of this is told by Axel’s point of view. As much as he says he hates her, he can’t leave her alone when she is in the vicinity. She is like a magnet he is drawn to. She distracts him at his fights, not to mention what happens when he finds out that she lost her virginity to her new boyfriend Nate.

Axel is a jerk and he definitely owns it. I like that about him. He knows exactly what he is doing and makes no bones about it. He grows up a lot throughout this story. This is one of those books that is just about the relationship. There are not a lot of side stories in this one. It doesn’t have any mafia, murders or intrigue and that is nice sometimes. 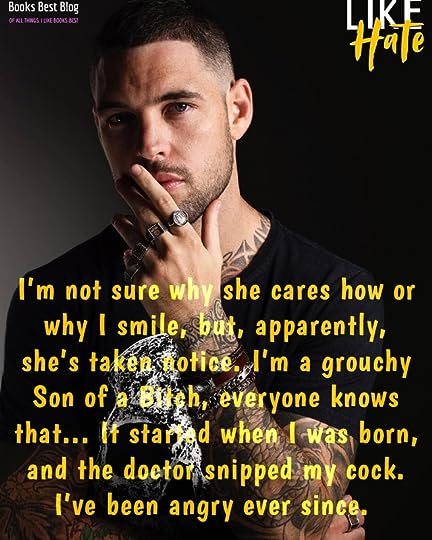