Ryder, Garrett, Kenzo, and Diesel—The Vipers.They run this town and everyone in it. Their deals are as sordid as their business, and their reputation is enough to bring a grown man to his knees, forcing him to beg for mercy. They are not people you mess with, yet my dad did. The old man ran up a debt with them and then sold me to cover his losses.Yes, sold me.They own me now.I’m theirs in every sense of the word. But I’ve never been meek and compliant. These men, they look at me with longing. Their scarred, blood-stained hands holding me tight. They want everything I am, everything I have to give, and won’t stop until they get just that. They can own my body, but they will never have my heart.The Vipers? I’m going to make them regret the day they took me.This girl? She bites too.

K.A Knight is an indie author trying to get all of the stories and characters out of her head. She loves reading and devours every book she can get her hands on, she also has a worrying caffeine addiction. She leads her double life in a sleepy English town, where she spends her days writing like a crazy person.

My review of Den of Vipers

Den of Vipers by K.A Knight

“Throw me to the wolves and I will come back leading the pack!”

This was a dirty filthy mafia story and it was very good. It was a long one though, it didn’t display pages but for how long it took me to read, I would guess at least 600-700 pages, though I could be wrong. But I would much rather read a long book like this than a series. I wish more authors would have one long book instead of three or four shorter ones. I can’t tell you how many times I have read a book and said I can’t wait to read book 2, but by the time it comes out I have either forgotten about it or am too busy to read the second book.

This was the story of Roxxane who is a tough as nails bar owner in the seedy part of town. Everybody in the area knows not to mess with her because she knows how to fight, she has a bat behind the bar that she is not afraid to use and she will fight dirty, with a kick to the cahone’s whenever possible.

When Roxy’s abusive father, whom she left when she was a teen, gets in debt to local mobsters called the Vipers he settles his debt by giving them his daughter. Then send four of their enforcers to pick her up and she gets the best of them. So the four Vipers come to her and take her as their captive.

What I liked about this book:

Roxy is an awesome heroine. She is independent, tough and beautiful. She isn’t afraid and she likes pain so she is able to stand up to the four hot as sin, tattooed tough guys that take her. They call each other brothers and all four are as close as real brothers because they have all been through hell and are broken in their own ways. 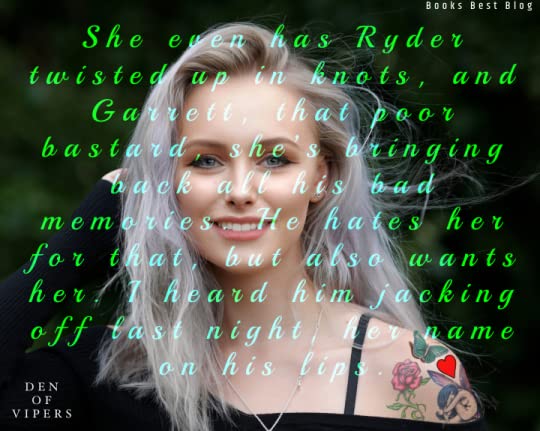 The leader is Ryder, he wears a suit and runs the Viper corporation, which is a legitimate company worth millions and has a lot of smaller companies underneath. Ryder is cold when he needs to be and his main goal is to keep his brother’s safe. Ryder’s real brother is Kenzo, who is more emotional but is also tough in his own way, he works with Ryder in the legitimate businesses. Kenzo also is a master at games and runs several illegal casino’s, he can also can throw down when needed.

Diesel is the assassin and his job is to torture and kill. He is a bit crazy from his childhood and loves to inflict pain, it is something he is very good at. Diesel can get anyone to talk when he gets to “play” with them. He is awesome and funny and cra-cra in a good way. He is the first to fall for Roxy.

Garrett is a tall muscular guy and he hates women and doesn’t like them being near him or touching him. He once fell in love and it went bad and he was betrayed, so he is determined not to make that mistake again no matter how much he wants Roxy. Garrett is the enforcer and he and Diesel make sure they are getting paid by those who owe them money and are in charge of the not so legal businesses. Though the vipers run the city and most of the cops are on their payroll. They can basically do what they want without fear.

I liked the storylines, first about the Roxy as a captive, then about their problems with the triad. I also really liked all of their background stories when each of them opened up about why they are broken and what their lives have been like. I also loved how hot and steamy the romances were. Though this is a reverse harem, it was generally like Roxy was having four separate romances. There was only one or two scenes where more than one of the were intimate with Roxy at the same time.

Though Roxy was awesome and very tough, I do think that there were a few times she was a bit too crass for me. Like one time she went with Ryder to a meeting with the board of Viper Corporation and she walks, sits down and puts her feet up on the table. I just don’t think that an adult who wants to be taken seriously would behave like that. She doesn’t need to curse at certain times and be disrespectful to look tough. I just think as a bar owner, she would know when to act crass and tough and when to act like a lady.

Another thing was that we know that Diesel is a bit crazy. He shows it in many ways but especially when he is getting information from someone in the basement of their building. We also know that Roxy likes pain and Diesel likes to cause pain so they do that when they are intimate. I just didn’t like that he said a few times, even after admitting he loved her, that he might kill her someday. He is so cute sometimes, with his crazy, but that wasn’t cute to me.

Though overall, I really liked this book. There were quite a few steamy scenes, but the book was very long so there was also a lot of story. I liked how it flowed and loved the action scenes. Roxy refers to John Wick a few times and this book does remind me of John Wick in a way because it was quite bloody and the bodies do pile up throughout the book. It is also hysterically funny at times and there were so many great quotes for me to put in my updates, that I couldn’t come close to using all that I wanted. I would say this was a 4 star review but the things I liked so outweighed the thing I don’t that it bumps it up to a 5. Especially considering that rather than a series, it is one long stand-alone book. I wish authors would do that a lot more!