‘A super sexy enemies to lovers romance that was FIRE HOT! I am obsessed with this series.’ ~Keri Loves Books

‘I freaking LOVE this series! Even though we are only 2 books in, I know that this will be one of my all time favorites!’ ~Two Sassy Chicks

Eighth Circle.
Fraud.
Also known as Gabriel Dane.
He is a ray of sunshine that warms your heart with kind eyes and a dazzling smile.
Don’t let him fool you with that silver tongue or lure you in with a body that draws every woman’s eye. This man is fluent in deception and a devil who only offers pretty lies.
Gabriel is my old nemesis.
I’m the girl that always fought back.
He has every reason to hate me as much as I hate him.
Now that he found me, he’s determined to make me pay for our past.
Except, there are two small details Gabriel doesn’t know that will be his ultimate downfall:
There are no rules when it comes to our war.
And I’ve learned to lie just as good as him.
***Each novel in the series depicts a unique romance, but the plots through each book connect in one world. For the best experience, read the series in order.
Nine Standalone novels. Nine dangerous men. Nine unrepentant sinners you’ll hate to love.

My review of Fraud

I went from hate to love! 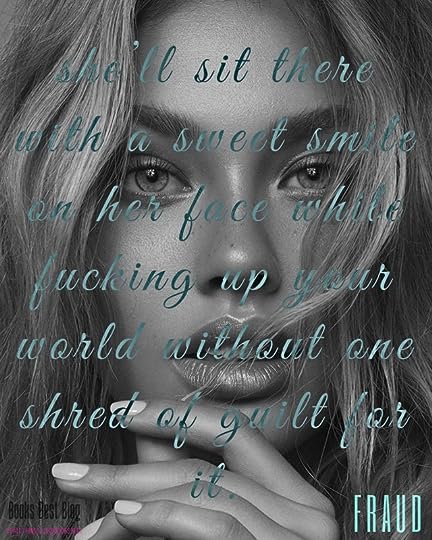 Though I really like the bully romance trope, at the beginning of this book, I had the same issues with as with the first book, Treachery. This series is planned to be nine books about the nine guys of the Inferno house at Yale. They have nicknames based on the nine circles of hell. This one is about Fraud (a.k.a. Gabriel) who is an accomplished liar. He was friends with Luca in the first book, though behind that friendship we knew that he was really just a foil for Tanner’s cruelty but they both had the same agenda.

The problem I had at the beginning was the fact that these guys are such manipulative jerks. For much of the book I really hated Gabriel. This surprised me because I liked him in Treachery. Though we find out in this book that everything he does is a fraud basically. His being genial and an all around nice guy is all a front and behind that he is more devious than Tanner even.

In treachery and at the beginning of this book, I really disliked the fact that the inferno guys are basically jerks because their fathers force them to do things like get information from people. I just didn’t get why they don’t tell their fathers to get lost and ignore the guys. Since the fathers have been evil since day one and never have done anything but use and abuse their kids. Also the fact that these guys are behaving nearly as bad as their fathers. However, this book did offer explanations (not excuses).

“For Tanner, this is about Luca. But for all of us, it’s about revenge against our fathers. We don’t need their money or their enterprise, but what we do need is the ability to teach them a lesson for all the shitty things they did to our lives”.
“Until we have what we need, we have to continue playing puppets that march to their orders, but once we have enough to bring them down, the charade ends and we’re free”.
“Could we walk away now? Technically, yes. But that’s too simple a solution when we’ve spent a lifetime being pushed around”.

Gabriel is a liar, Ivy knows he is a liar and that she can never trust anything he says. They have been pulling pranks on each other since high school and they hate each other. Gabriel hates Ivy for knowing too much about his background and Ivy hates Gabriel for taking out his anger meant for his father on her. But they are also attracted to each other.

I liked that Gabriel loses his attraction for her when he thinks she is just a socialite with no ambition and no brains. I like that he is attracted to her because he sees her as an equal and he knows she can give as good as he can. I thought Ivy was great, she is strong but knows her limitations. She had reasons for being a socialite financed by her father, but really wanted to be independent.

I really liked the fact that Gabriel really owns his faults. Like the quote above where he owns up to wanting revenge on the fathers of the inferno guys. He says sure they could get out from under their father’s thumbs now if they really wanted, but they really want to make the fathers pay for what they have done. Gabriel is the same way about other things. He owns up to how awful he is. Granted that is not an excuse but there is something about being bad and owning it that I like, even though he may not be willing to change. So I completely changed my tune about Gabriel from the beginning of the book to the end!