“What a ride Nightingale was! Giulia Lagomarsino really upped their emotions with Florrie and Alec’s story.” ~The Art of Reading

“WOW! What a roller-coaster ride this book was! Incredible! So many ups and downs and emotion. An entertaining addition to the series!” ~Goodreads Review (Jennifer)

Florrie
I don’t do well with emotions and yucky love stuff. I do the best I can, but at the end of the day, I’m better at showing someone I love them by fighting for them. That’s the way I’ve always been and how I’ll always be. And I have one helluva fight ahead of me. I’ll do anything for the people I love, but what I didn’t expect was to be fighting the one person I thought would always be on my side. I don’t know if I can ever forgive him for this or if we can ever move forward. Some betrayals are just unforgivable.
Alec
Life is going great. I have the woman I love by my side and a kid that is quickly becoming a huge part of my life. What can go wrong? Then it happens. One phone call changes my world in such a profound way that I’m not sure anything will ever be the same again. I risk losing it all with my decisions, but I have to stand up for what I believe is right. I just hope that when the dust settles, I still have someone on my side.

My Review of Nightingale

This book was another great Reed Security story. I really enjoyed the drama and the the romance. This book was about Alec and Florrie who have been on the same Reed Security team for a while. There was a previous book about their early relationship, Alec (Reed Security, #17). I haven’t yet read that book but can’t wait to find out more. I plan on reading all the books I missed since I started at book 21. These two have quite the steamy relationship.

Alec has asked Florrie to marry him and she agreed. Florrie (her mother named her after Florence Nightengale), can’t have children. However, Alec and Florrie have had temporary custody of Reid who is fourteen since they found him near death eight months ago. They are moving toward adoption and both of them love Reid like he is their own child. Reid has been through a lot since his Mother married an abusive Senator and his step-father used to throw him in the basement for days on end.

Reid ran when he overheard his stepfather say he was planning on killing Reid. The Senator thought that having a murdered stepson would gain him sympathy and voter support. Reid is now doing much better and they have been living in the panic room at Reid security until their house is ready. It is called a panic room but basically it is a panic apartment and some of the other Reid Security agents and their families have lived there at one time or another.

Reid’s Aunt and Uncle from Utah find him and contact social services to gain custody. This ends up causing a rift between Florrie and Alec when they decide to handle the custody battle in different ways and don’t agree with each other. The start of the book says you will end up being on one side, Florrie’s or Alec’s and that held true. Though I was on Team Alec, I could see Florrie’s point of view and in some of the things I thought she was right. Though I did think that either way, it would have ended up the same or similar, just quicker.

I won’t go into how they disagreed and what happened. However, I really liked this book. I thought Reid’s story was compelling and his struggle to catch up to other kids his age was pretty great. I know that the next book is going to be the last Reid Security book but I would like to see more about Reid when he grows up. Caitlin, Cap’s 10 year old daughter (going on 30) was Reid’s best friend in this book and I can see them together at some point.

The one thing I didn’t like about the book was that after Florrie and Alec disagreed about how to go about the custody issue. They had relationship problems. I didn’t mind that and I even liked that their friends often jumped in on their issues to let them know when one of them was being to harsh or did something idiotic. I just got sick of the back and forth after a while and I really disliked Florrie at that point. I think that she took things way to far and didn’t even try too see Alec’s side of things when he knew exactly what her side was about and could even understand her side but he still stuck to what he believed in.

Sometimes in books I like it when someone is being a jerk or unreasonable and the other person doesn’t let them get away with it. I liked what Alec did and thought Florrie was in the wrong most of the time. I also loved the supporting characters and this book was as good as the others with the humor. These Reed Security guys are so funny sometimes when they think they or their friends are doing things that aren’t manly. The scene about the fanny packs was hilarious and the ending was fantastic. 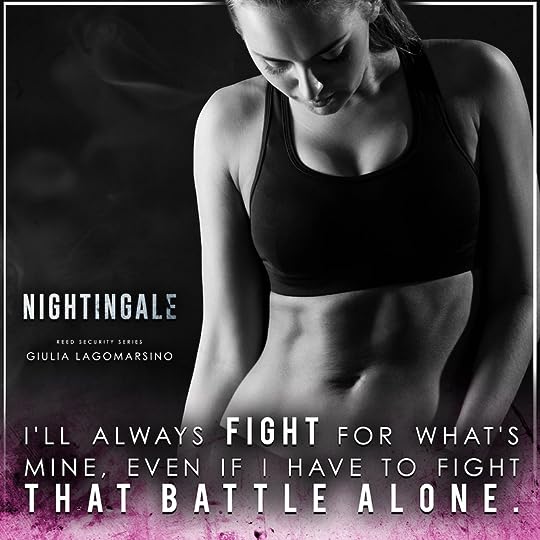