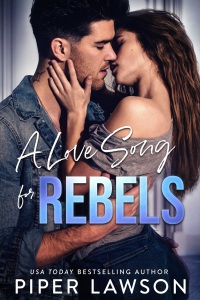 Tyler didn’t set out to break my heart…
But life doesn’t give marks for good intentions.
Now, I’ll stop at nothing to achieve my dreams. I’m done playing by anyone else’s rules.
But when Tyler shows up in the last place I expect, with secrets and a confession…
There will be a reckoning.
Because the naive girl he shattered is gone.
And the woman in her place is ready for a fight.
A LOVE SONG FOR REBELS is Book 2 in the angsty new adult, academy-inspired Rivals trilogy and should be read following A LOVE SONG FOR LIARS (Rivals #1). 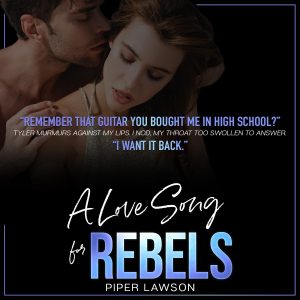 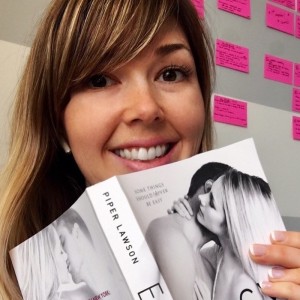 Piper Lawson is a USA today bestselling author of smart, steamy romance! She writes about women who follow their dreams (even the scary ones), best friends who know your dirty secrets (and love you anyway), and complex heroes you’ll fall hard for (especially after talking with them).
Brains or brawn? She’ll never make you choose.
Piper lives in Canada with her tall, dark, and brilliant husband. She believes peanut butter is a protein, rose gold is a neutral, and love is ALWAYS the answer.

My review of A Love Song For Rebels

A Love Song for Rebels by Piper Lawson

I enjoyed getting back into the lives of Tyler and Annie. This book had great character development of the two main characters and I really like the setting and storyline but I think there could possibly have been something else added. I guess it didn’t have the suspense and tension that the previous book had. It was still a very good book in my mind, I just think it wasn’t quite as good as Love Notes and A Love Song for Liars.

In the previous books we found out that Annie and Tyler have known each other since they were kids. Annie is the Daughter of Jax Jamieson who was one of the biggest rockstars on the planet before he retired a few years ago. Annie didn’t grow up with Jax, she thought he was an uncle until she overheard that he was in fact her father and the people she thought were her parents were actually her aunt and uncle.

This book starts out with Annie and Tyler both at the same performing Arts College in New York. Annie had auditioned in the spring and was accepted but her Dad wouldn’t let her go, because he didn’t want her to go through some of the things he went through in the music industry. But that school is all Annie wants and music is the only thing she wants to do, so she goes and tells Jax she is at Columbia.

Annie and Tyler run into each other right away and it isn’t long before they are seeing each other again despite how it ended last time. I did think they got back together a bit quickly, but I like their passion for each other.

The one thing I sort of had issue with is that in the last book, Annie had the lead in the school musical The Little Mermaid. She was jealous of the fact that Jax spent all his time helping Tyler with his music and showing him the business while absolutely refusing to think that she might be as talented as Tyler. So Annie really wanted her father to see her in the play so he would notice how good she was and take her seriously as an artist.

In this book Annie is lying to her Dad about the fact that she is going to a performing arts school and she knows that she will have to tell him sooner or later. However, she wants it to be at a time when he can see how well she is doing so he will agree she belongs there. She pins her hopes on winning a spot in the fall showcase and having Jax see her perform. It just seemed a bit redundant. Too similar to the last book, I guess.

I really liked the interactions between Annie and Tyler though. The romance was sweet, but not too sweet. They had some steamy moments and they were meant to be together. The supporting characters were great. I especially liked Heath, her fish.