While She Sleeps Release and Review Blitz

Dangerous. Unstable. Obsessive.
She believes in fairytales and awaits her prince.
But I arrive at her doorstep and I’m far from royalty.
The shiver down my back tells me he’s there. As if he were touching me.
Cold, angry, aloof—he’s everything I don’t need. But I can’t turn off my attraction when he’s near.
My sleeping beauty doesn’t realize just how dangerous I am.
She trusts so easily, smiles so beautifully. And while she sleeps, I watch.
With each passing night, I become more addicted.
Until I’m a man obsessed.
I feel his gaze on me, watching while I sleep.
He pushes me away in the light, but in the dark, he comes to me like a moth to a flame.
I crave it. He doesn’t know just how broken I am.
I believed she was the light to my darkness.
But it turns out my sleeping beauty likes to dive into the shadows alongside me.
She’s mine, but that decision could kill us both.

Review of While She Sleeps

While She Sleeps by Dani René

Sleeping Beauty and her Broken Prince! 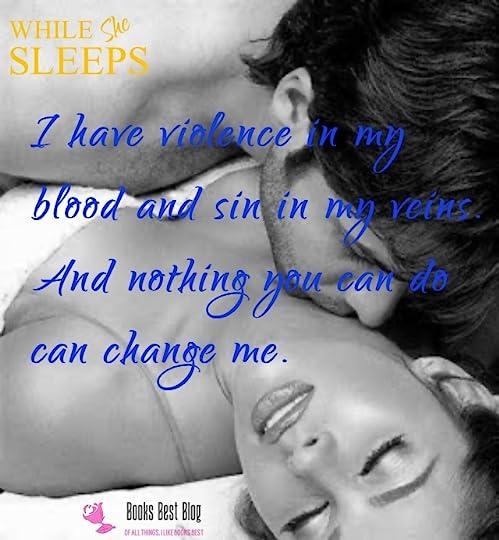 A twisted fairy tale of a Mafia prince who was promised a ten year old girl to marry on the day she turns eighteen. The arrangement set up between his father, the King of Chicago and his father’s best friend. The Prince decided he wanted nothing to do with the kind of kingdom his father ruled over and ran away but never forgot the girl that was promised to him.

I enjoyed this twisted fairy tale but there were certain things about the story that didn’t quite make sense or maybe were over-complicated or even a bit too coincidental to make sense. So I’m trying to figure out how to structure this review and be able to give you that information without saying too much.

What I liked about this book:

The way the romance between Logan (Screen Name: Broken Prince) and Vera (Screen Name: Sleeping Beauty) began as an online relationship on a web site for people with fetishes or kinks that are outside the norm. They seemed to have the same fantasy in common and while Sleeping Beauty sees it as dark and deviant but basically allows herself to fantasize, Broken Prince thinks it makes him a monster.

When they got together the romance between Logan and Vera was extremely hot. Though Logan seemed overly tortured at times. I liked the pace and the background given. I liked that Logan stalked her and wanted to protect her. I liked that Logan was afraid his deviant desires would overtake him and he would hurt her so he was cautious despite the fact that Vera was unafraid.

I didn’t like the fact that Vera seemed so much more grown up and clear headed than Logan. I get tortured and moody, but sometimes he seemed a bit of a wimp. I mean he went on about hurting her when she was sitting right there saying look at me, I’m fine, you didn’t hurt me. Though I did like the pace of the relationship, it took Logan a bit too long to see that he wasn’t really a monster.

There were several things that needed further explanation. For example when the were first online as SB and BP, it seemed that they just found each other randomly on a dark site because they had similar fantasies and needs. However when Logan comes to the town where Vera lives and sees her, it seems like he’s been keeping tabs on her ever since she ran away from Chicago when she turned eighteen. So was he stalking her on the web or was it all a coincidence?

Then I just didn’t get some of the things that happened later in the book. I didn’t understand all of the motivations behind why certain people did certain things. Like when his father finally caught up with them. Why did he do what he did at the cabin? It didn’t really make much sense to me with how things turned out later. Though I have some thoughts, I just wish it was made more clear.

Overall I liked the story, it was a good twisted fairy tale/stalker/captive romance with a bit of strange kink added in.

I voluntarily read and reviewed an advanced copy of this book. All thoughts & opinions are my own.