Ari is going to maul your heart and stalk your senses. ~ Shabby, BookBistroBlog

This is how a dark stalker book should be written!! This was top notch!! In a league of its own!! ~ Kitty Kats Crazy About Books

Probably the best stalker romance I have ever read! ~ I like Books Best

You’ll judge me.
Hate me and tell me I’m wrong.
Refuse to see how my darkness is what she needs.
While I don’t particularly care about your feelings in the matter, and while I pursue her despite the wedding bells that rang for another, only I can see how she is drowning beneath mediocrity.
How many times must I remind her?
It can’t matter that I am the person who ruined her life.
The man who killed her father.
The constant shadow that watches her sleep.
The lover who prefers dirty alleyways to freshly laundered sheets
She’s mine. Always has been.
I’m the worst thing for her, yet I’m the only salvation she knows.
He had his chance to make her happy.
He failed.
He didn’t see how she was dying inside because he couldn’t know her.
Not like I know her.
I am her stalker.
Her protector.
And the only man that can bring her back to life.

Clearing my throat, I whisper, “I’m a married woman.”
“You keep saying that, but I’m not sure I care.” A pause. “I’m not sure you care either.”
He runs a fingertip along the curve of my hip, and I jump, my throat slamming closed as I attempt to hide the reaction.
“Are you planning on having any fun tonight, Adeline? Or has your life become so boring, you’ve forgotten what it is?”
I don’t answer him, but it doesn’t stop Ari from having his fun.
Another soft slide of a fingertip, this time down the center of my nape, the secret touch hidden by the fall of my hair.
“I hope you know I plan to wrap my fist in this hair the first time I sink inside you.”
My entire body shivers, my lungs struggling to breathe as he pulls his hand away.
Voice a low croon, he asks, “Will you dance with me?”
Swallowing several times before I can answer, I lie to him. “I don’t dance.”
But it makes me remember when I used to lose myself to the beat of music, the hours I would spend happily working myself into a full body sweat, my hair wild, my heart pounding. I’d felt so free then. So unencumbered by the weight of responsibility that came with being the wife of Grant Cabot.
“I think you do,” he whispers.
“My husband doesn’t dance,” I say, my voice firmer because it makes me angry to admit it.
A soft chuckle. “Then it’s a good thing I’m not your husband.”

Review of The Danger You Know

The Danger You Know by Lily White

Probably the best stalker romance I have ever read! 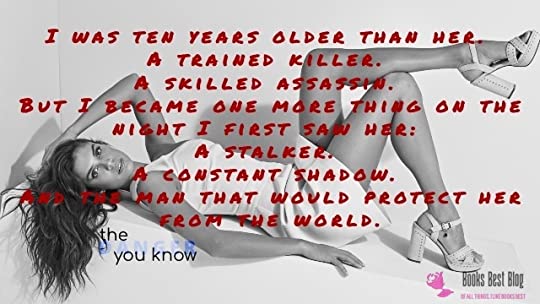 This was an odd one to be certain but I really liked it. It is definitely dark and twisted in it’s own way but in some ways it almost is not, but that has to be taken with a huge grain of salt. Because the Hero or anti-Hero as the case may be, is definitely an assassin by trade and I know there is some sort of thought process out there or maybe it is just something I heard in the movies, that if people kill for money and not fo the thrill of killing then they aren’t psychopaths or sociopaths (I always get those confused).

Anyway, our boy Ari as well as his friend Lincoln who we see a few times in this book, both are assassins and self proclaimed bad guys. Ari even calls himself a Villain on numerous occasions. Though he kills for money, he has no conscience about it and he doesn’t care what the person has done to get a hit put out on them. He figures they probably did something bad, but he doesn’t ask and he feels no guilt. Until one night when he kills a man in his home and makes it look like suicide by gunshot to the head.

The man is supposed to be home alone, but after he leaves through the window he turns around and sees the man’s sixteen year old daughter Adeline come in and find her father like that and he sees how she is destroyed by what she sees. It is the first time he feels guilt and from that day forward he becomes her stalker.

Ari is a true stalker, meaning he watches from the shadows and finds out everything about Adeline’s life, but doesn’t make himself known to her. Ari sees that she has issues sleeping, he breaks in when she isn’t home and reads her journals and steals small things from her room, he reads the books she likes and listens to the same music as her. Ari is crazy obsessed with Adeline, he even has Lincoln watch her when he is away on jobs. 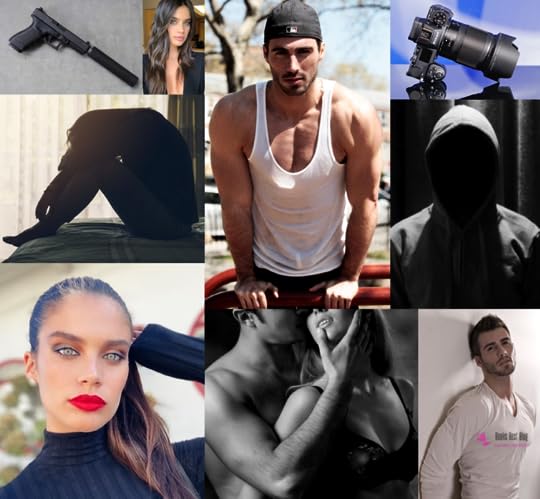 Though Ari is attracted to Adeline he only watches her and he doesn’t actually get involved in her life until much later. I don’t want to give anything away about that part because by that time Adaline is married to someone else, but let’s just say things get very complicated between them and though Ari is crazy, he also seems to know Adeline better than anyone ever has. But he also has some huge secrets like the fact that he murdered her father.

There are a lot of things going on in the book, but I loved every minute and the romance between Ari and Adeline was super steamy. Adeline suffers from several sleep disorders such as narcolepsy which includes something where she has vivid dreams and/or nightmares in the space between sleep and wakefulness that may be dreams or hallucinations, she also suffers from crying/screaming/fighting in her sleep and sleepwalking. So it was pretty interesting to learn more about some of these conditions.