The Traitor by Abigail Owen 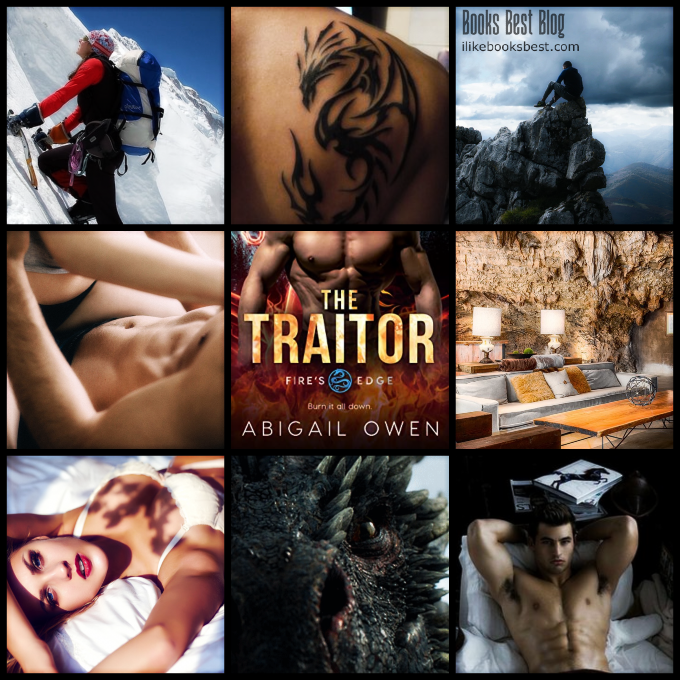 Favorite Quote: “I knew she was going to be trouble the second I saw her.”

The heroine: Hayden Reece – a human woman whose adoptive parents were dragon shifters. Her fated mate was killed when she was 10 years old along with her human parents. She was raised by his parents who were rogue dragon shifters.

The Hero(es): Rune Abaddon – one of the first black dragons selected to be enforcers in the colonies. Rune was one of the Huracán enforcers until he turned rogue and left the team to rebel against the clans and the mating council. He was branded a traitor and is to be killed on site if found.

The story: Rune’s band of rogue shifters and the fated mates they were protecting have left the mountains in Argentina where he has been based for the last ten years when he finds Hayden climbing the mountain in search of him. Her adoptive parents have been taken by Alaz enforcers and she needs his help to save them.

Rune and Hayden travel to from Argentina to the Pacific Northwest, the mountain stronghold of Rune’s former team, the Huracán enforcers where they ask for help from the enforcers and the local populations of dragon shifters. The guys from the previous books in this series and their mates all have roles in this book and it is nice to see they aren’t at odds with Rune like they were in the earlier books.

The chemistry between Rune and Hayden is off the charts even though she lost her fated mate at a young age and is not able to be a mate to Rune. Dragon’s only have one fated mate and part of the mating ritual is for the dragon to breathe fire into the potential mate. If they are wrong about being mates, the female will die. If they are mates, the female becomes a dragon shifter.

The mating council has been pairing high ranking clan members with all the potential mates that are found despite knowing many are likely not to be mates to those dragons, so a lot of the potential mates are dying and Rune has been saving them for years and now many of the other dragon shifters in the colonies are finally realizing he was never a traitor but a protector.

The different storylines were all great and the struggles the dragons are having with the alliance seems to me to be quite similar in many ways to what happened with Humans in the Americas. How they left their homes in Europe and came to America and decided they no longer want to answer to a king so far away.

In this case all the dragon clans in the old country are separated by color, with each having their own king and one high king, but in the colonies there are dragons of every color living together. It is more of a melting pot.