Today we are celebrating the release for EMPIRE HIGH ELITE by Ivy Smoak! This title is a new adult, contemporary romance. Join Ivy’s Group for access to bonus content from the book and visit Ivy on her facebook page for exclusive news.

Welcome to the world of the elite. My mom fell in love with a monster. I know he’s dangerous. And I know my mom never wanted him in my life. I don’t want him in mine either. But I’m being forced to live with him. I’m stuck in his haunting apartment in a world where I don’t belong. A world full of beautiful people with ugly souls. A world filled with secrets. And the one person that I thought I could rely on was Matt. But he says my new family is a disease. Does that make me toxic too? Is that why Matt wants to keep me his dirty little secret? I should have known that all the secrets would come crashing down soon. I just never expected more to break than Matthew freaking Caldwell breaking my heart.

GRAB THE FIRST BOOK IN THE SERIES

Ivy Smoak is the international bestselling author of The Hunted series. When she’s not writing, you can find her binge watching too many TV shows, taking long walks, playing outside, and generally refusing to act like an adult. She lives with her husband in Delaware.

My Review of Empire High Elite 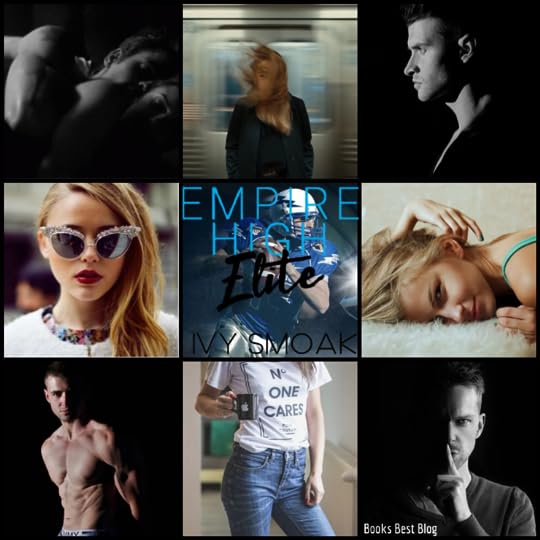 The Hero(s):
Matt – One of the untouchables, he is dating the heroine, Brooklyn Sanders, but keeping it secret. He says it is because Isabella is blackmailing him with something that will hurt his best friend James, who is already depressed and an alcoholic.
Felix – Brooklyns friend who she is also attracted to. Felix’s family is not from old money like the untouchables at Empire High, but they are wealthy. Felix is in gym class with Brooklyn and they run together. He is the first guy that liked her for who she is and wasn’t afraid to show it.
Miller – Brooklyns bodyguard that Mr. Pruitt has watching her 24/7.

The heroine: Brooklyn Sanders (Pruitt) – Through the first book, Empire High Untouchables, Brooklyn kept wondering who her father was and now she finds out it is Mr. Pruitt who is also Isabelle’s father. Isabelle is the queen B at school and has bullied Brooklyn since she moved in with her Uncle and started at Empire High.

The Love Story: This was crazy and I don’t want to give away any spoilers but to say that Brooklyn is very confused and she is in pain. She doesn’t seem to know what she feels and for whom.

I know clean romances are generally not dark romances but this one definitely was. There was kissing and cuddling and a few hot moments, but nothing that I would call steamy. Though I would consider this a dark romance because there was bullying, there were threats and Brooklyn was afraid during parts of this book. I can’t say much else without giving things away but the story certainly held my interest. There were some strange things that were never explained so I can’t wait to find out what is behind those doors in the next book. Also the ending was probably even more spectacular than the ending of Empire High Untouchables!