I Love You I hate You Book 2 Release/Review Blitz

I fell in love with my next door neighbor when I was eighteen. It was fast and crazy and the best experience of my life, until I got pregnant. Logan, he pushed me away when I needed him most. Without his support, I made the hardest decision of my life and then I left. I ran away to start over with no plans of looking back. Only now I have to go back. My dad is about to marry his mom and it’s just a matter of time until my secret comes out. When it does, everyone is going to hate me.

Please, don’t touch me, Logan,” Danika whispers. She has to feel it. The heat bouncing between our bodies. If we’re not careful, it’ll ignite into an inferno and burn us. For now, it’s bright, and magnetic, and the kind of painful that makes you want more. “I’m holding on by a thread.” I say nothing. There’s maybe a foot between us. A full twelve-ish inches I’m doing my best to maintain because the snapping of her thread could mean a plethora of things. The last time Danika snapped, she left me. Flushed us down the toilet like a used condom with no afterthought of all the could have beens. The universe, however, has other plans. A wave, bigger than the knee knockers we’ve felt so far, pelts into us, lifting the water thigh-high and shoving Danika backwards. I’m not prepared for the force of the wave or her weight. We topple. Me landing on my ass, holding onto Danika’s waist so she doesn’t somersault over me and to the shore. Within seconds, the water retreats back into the abyss. Danika stands, looking down at her soaked dress, one part shocked and the other part horrified. I push to my feet. My head is spinning for the first time in months. I may drink a lot, but I know my limits; dancing a fine line between buzzed and tipsy more often than I’m comfortable admitting out loud, but never drunk. This spinning, spiraling feeling is all Danika.

Bailey B is an up and coming New Adult author. She lives in Lehigh Acres Florida with her husband, twin girls, and two fur babies. She enjoys (but doesn’t get to take part in because of her crazy daughters) the simple things like Disney+ binge watching, Netflix romcoms, reading and sleeping. She reads two to three books a week and thinks if narwhal’s are real animals then unicorns might be too.

My review of I Love You I Hate You 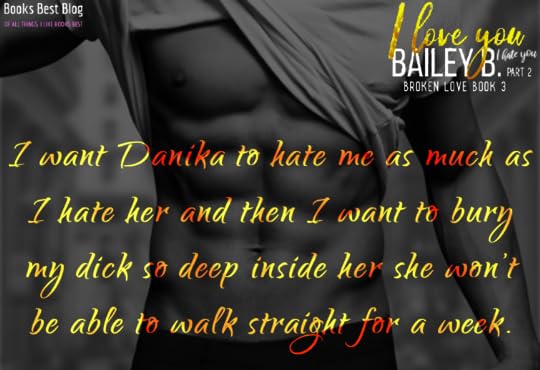